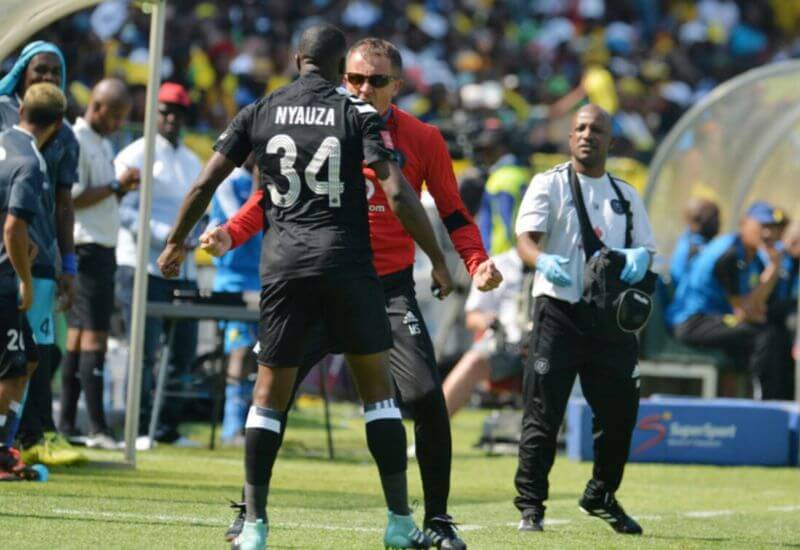 Orlando Pirates have secured an impressive 3-1 win over Mamelodi Sundowns in an Absa Premiership clash played at the Loftus Versveld on Saturday.

Goals from Ntsikelelo Nyauza, Mpho Makola and Luvuyo Memela were enough to see the Mighty Buccaneers record their second back to back 3-1 victory, and also avenge the corresponding fixture against the Brazilians by the same margin.

With this win Pirates close the gap to five points from the current log leaders.

Although revenge was not what the players took to the field on the day, the Ghost can be excused for holding those sentiments with that notorious defeat of last season still fresh in the memory.

The heat was no deterrent for the intensity in the blockbuster between the two giants as Orlando Pirates started like a house on fire.It took the visitors under two minutes to open the scoring when the Brazilians defence failed to deal with a corner. The ball fell for defender Nyauza who rifled the shot into the roof of the net.

Sundowns piled on the pressure in an attempt to reply immediately and were only denied the equaliser through the brilliance of keeper Jackson Mabokgwane who made a number of key saves to deny Themba Zwane, Tiyani Mabunda and Percy Tau in succession.

For all of Sundowns’ pressure, Pirates doubled their lead in the 18th minute. Makola with a clinical finish following a defensive blunder from Motjeka Madisha who coughed up possession in a dangerous position.

It should have been 3-0 in the 32nd minute after Mabokgwane released Memela on goal with a splendid long range pass only for the Bucs flying winger to send his chip over the bar with the keeper at his mercy.

Pirates were made to pay for that miss six minutes later when the Brazilians finally found the back of the net. Themba Zwane played a defence-splitting pass for the on-running Tau who made no mistake - firing an unstoppable left-footed shot past the keeper.

The visitors came close to restoring their two goal advantage in the 42nd minute after Denis Onyango made a hash of things at the back to allow Thabiso Kutumela to round him and lay off a pass to Memela. Unfortunately Memela’s well taken shot rattled the woodwork.

The teams went into the break with Bucs leading 2-1.

Sundowns were rampant in the second half as they sought that elusive equalising goal. Anthony Laffor blew Downs’ best opportunity to score in the 66th minute when a poorly defended ball found him unmarked in the box however, the lanky Liberian who scored the third goal in the corresponding fixture in Orlando, fired his attempt way over the crossbar, much to the relief of the Bucs defence.

With all their possession and chance creation in the second half, Downs found themselves 3-1 down with Memela putting the game to bed with seven minutes left on the clock.

Pirates move to third on the table and play host to Polokwane City in their next Absa Premiership clash.