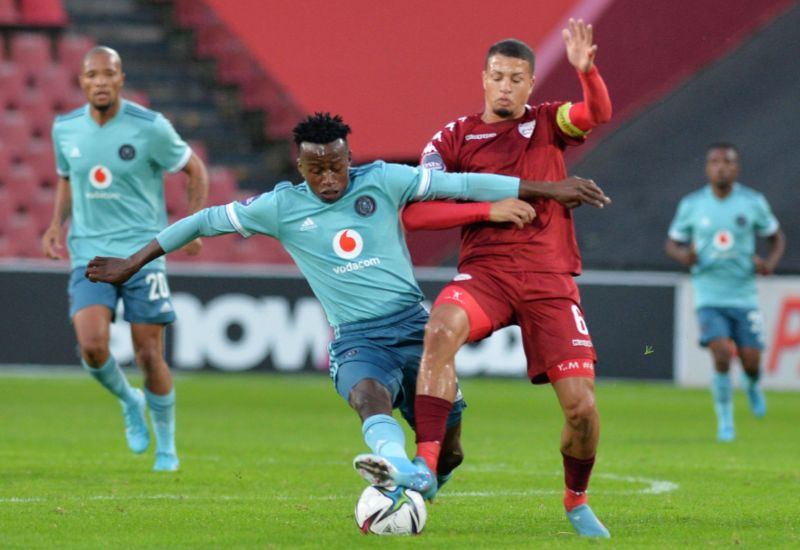 Orlando Pirates edged past Sekhukhune United to earn a 1-0 win in what was a scrappy affair at Emirates Airline Park on Wednesday.

In their first league game since winning a dramatic five-goal affair at home to SuperSport United, the Buccaneers were looking to scale up the table, having found themselves in fourth place.

This was, however, to be a tame event early on at the centre of Johannesburg, with both keepers given very little to do by the opposition.

Sekhukhune had an opportunity from a set piece 21 minutes into the encounter, taken by Roderick Kabwe, who struck his shot straight into the Bucs wall.

With minimal chances at goal throughout, Pirates had their best opportunity from a set piece just after the half-hour mark when Deon Hotto cleverly picked out an unmarked Siphesihle Ndlovu inside the box, but the Bucs midfielder skied his effort at goal.

The first half ended with no shots on target registered at either end, and the second period began much in the same vein, albeit with more urgency from both sides.

An opportunity to alter the trajectory of the game was afforded to the visitors in the 63rd minute when Ndlovu, who had been making some penetrative runs into the box, was brought down, resulting in a penalty.

Hotto, who had struck twice from the spot in Pirates’ last fixture stepped up, but Sekhukhune goalkeeper was equal to the task, making a good save to keep the two sides deadlocked.

Wholesale changes were made by the Pirates dugout in the ensuing moments, with Fortune Makaringe and Thembinkosi Lorch among the five men brought on in quick succession to hand the visitors an extra edge on attack.

The duo combined just seconds after being brought on, with Lorch narrowly misdirecting his header after being played in by Makaringe.

A lapse in concentration by Dlamini provided a half-chance for the Buccaneers eight minutes from the final whistle.

While trying to find a teammate, the Sekhukhune shot-stopper lost control of the ball, which was gathered by Tshegofatso Mabasa, and the striker  had the presence of mind to tee it up for Makaringe, who guided it into the net from just outside the box to make it 1-0.

The closing moments had Pirates forced to defend their slim lead, and the home side came close to stealing a point from the encounter with a last-gasp shot from Chibuike Ohizu, whose snap shot rolled just wide of the target.

The full-time whistle sounded moments later, and the Buccaneers had hung on to complete the double over the Premiership newcomers.