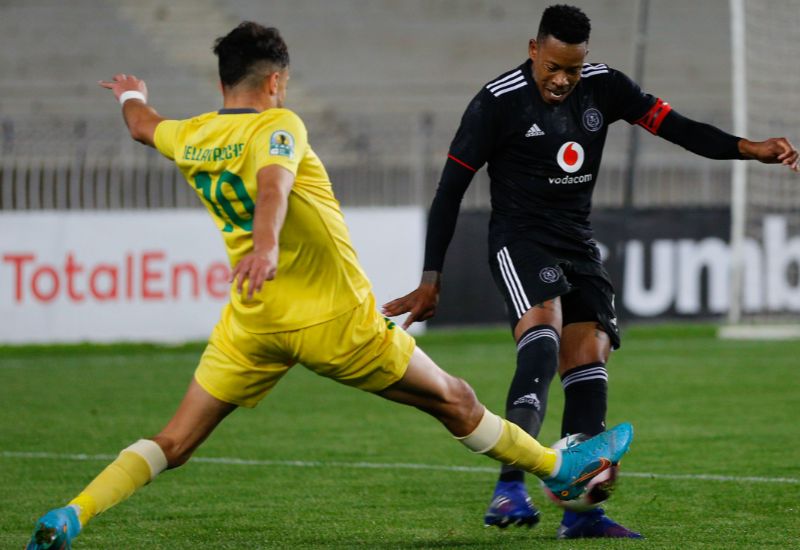 Orlando Pirates booked a spot in the CAF Confederation Cup quarterfinals with a game to spare after an impressive 2-0 win away to JS Saoura at Stade du 5 Juillet on Sunday night.

The Buccaneers had slipped to second place in the Group B standings by the time the kick-off whistle sounded, following a victorious outing for Libyan champions Al-Ittihad.

They were now up against another side well within a fair shot of making it to the Last Eight of the competition.

The high stakes of the encounter were not immediately apparent early in the contest, which began in a subdued manner with neither side taking the adventurous route early on.

Pirates had a half-chance midway into the opening half when Goodman Mosele pounced on a loose ball, beating one defender but his pass towards Kwame Peprah was too close to goalkeeper Zakaria Saidi, who gathered the ball comfortably.

He was again in the thick of things in the 26th minute, heading just wide from a corner that was delivered deep by Kabelo Dlamini.

The latter stages of the first half saw the home side grow in confidence, demanding plenty from the Bucs defence.

They got close in the 36th minute when Richard Ofori was forced into a low dive to his left, making a brilliant save to keep out a shot from Ismail Saadi.

From the resultant corner, midfielder Oussama Belletreche leapt high to head towards goal, missing the target by a distance.

It continued to be one-way traffic for the best part of the first period, with the visitors forced to do most of the defending.

The tide however turned early in the second half, and it did so in a decisive manner just three minutes after the break.

This was when Pirates were awarded a free-kick after a foul on Kwame Peprah.

From the set-piece delivered into the Saoura box by Deon Hotto, it was Ntsikelelo Nyauza who leapt the highest, directing the ball into the back of the net for the opening goal.

Three more minutes was all it took for one to become two, as Bandile Shandu found an unmarked Kabelo Dlamini, who made no mistake with his first-time shot past Saidi into the net.

Saoura got close to pulling one back in the 70th minute when Saadi had the ball snatched off his head by Ofori as he attempted to turn it into the near post.

A spanner was thrown in the works just six minutes later when a visibly injured Mosele was given his marching orders after receiving a second booking for time wasting - much to the bemusement of the visitors.

Forced to navigate the rest of the encounter with 10 men, the Buccaneers had to weather another storm from the home side, who were desperate to claim something from the encounter.

The defence stood up well to the challenge, with Ofori only called upon to make comfortable saves in the dying moments.

The result could have been more emphatic for the visitors when deep into injury time, Paseka Mako emerged up field with a strong left-footed shot, which drew a save out of Saidi.

It was to be Pirates’ night, as they overcame being a man down to take their points tally to 12 in Group B ahead of their home encounter against Al-Ittihad.