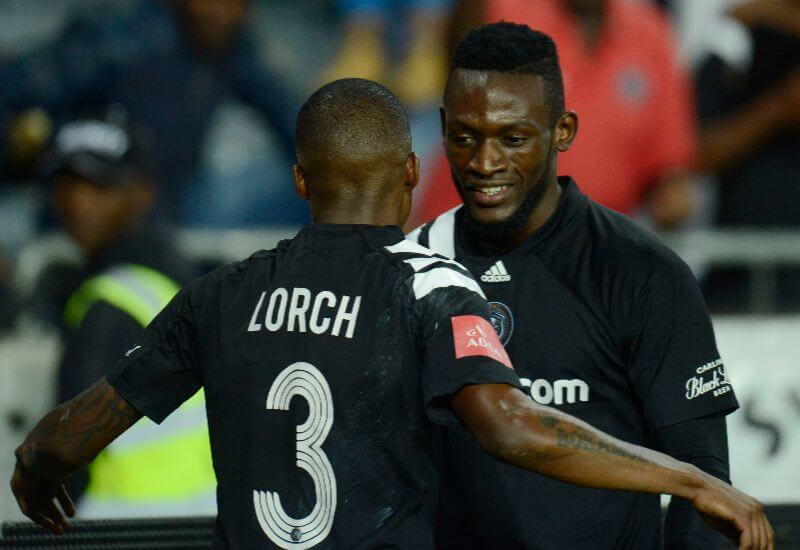 Orlando Pirates have secured a crucial victory in their pursuit of the coveted Absa Premiership title with a hard-fought 2-1 win over Bloemfontein Celtic on Wednesday night.

The victory sees the Buccaneers remain in second place on the log, one point behind leaders Mamelodi Sundowns, who defeated Chippa United in the same evening.

Pirates threatened in the early minutes through a free kick from Justin Shonga which was punched away by goalkeeper Patrick Tignyemb, while Thembinkosi Lorch sent a long-range effort just wide of the mark.

Celtic should have claimed the lead in the 6th minute when a clever dummy from Jacky Motshegwa allowed Tshepo Rikhotso’s cross to find Victor Letsoalo in space in the penalty area, but his low shot deflected just wide of the target.

The Buccaneers went ahead in the 17th minute, with Justin Shonga’s superbly delivered corner kick finding Musa Nyatama just past the near post and the midfielder netted with a downward header for a second goal against his former club this season.

Ten minutes later it was almost 2-0 to the Soweto Giants, with Lorch trying his luck from long range again – this time his powerful effort was very much destined for the back of the net, but Tignyemb made a fine diving save.

Phunya Sele Sele should have levelled the game a couple of minutes before the break, with Ndumiso Mabena doing great work down the right flank before laying on a good chance for Motshegwa, but the midfielder put the ball over the top from close range.

The visitors didn’t have to wait much longer for a goal, as they made it 1-1 two minutes into the second half as defender Lorenzo Gordinho capitalised on a couple of lucky rebounds at a corner kick by stabbing the ball home from a tight angle.

Pirates responded in a positive fashion, sending on striker Thamsanqa Gabuza for defender Marshall Munetsi, yet they needed goalkeeper Siyabonga Mpontshane to make a brilliant finger-tip save to deny Mabena just past the hour mark.

Midway through the second half Gordinho went from hero to villain when he hauled down Gabuza just outside the box in a professional foul and earned a straight red card for his infraction, reducing the visitors to 10 men.

Bucs capitalised on their numerical advantage in the 79th minute as substitute Augustine Mulenga exchanged passes with Lorch before cracking a superb shot from just outside the ‘D’ into the top corner of the net, putting the hosts back in front at 2-1.

Pirates had a somewhat nervy ending to the game, but did just enough to hold off the team in green and white and claim all three points.