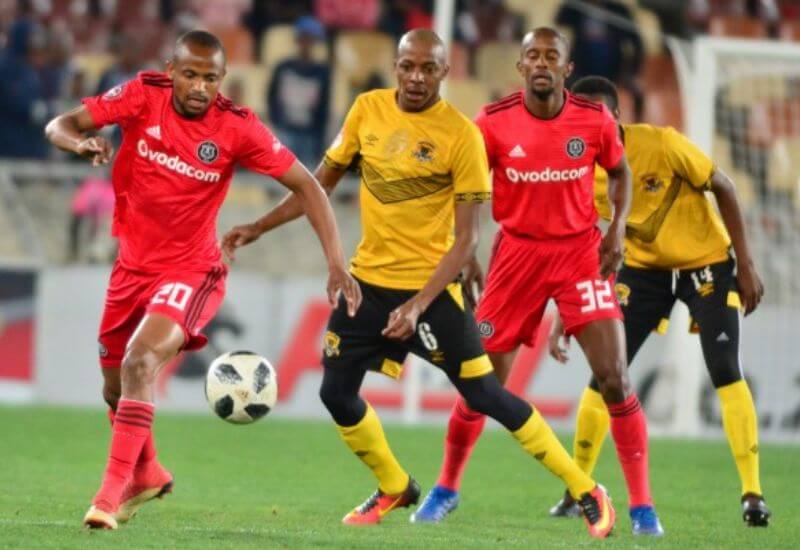 Orlando Pirates made sure that they maintain their dominance over Black Leopards when they won 2-1 in an Absa Premiership encounter played at the Peter Mokaba Stadium on Tuesday night.

Two goals on either side of the half were enough to see the Buccaneers secure their first win in three matches and also maintain their unbeaten run against Lidoda Duvha to 13 consecutive games.

The win wasn’t without its fair share of controversy however. Striker Thamsanqa Gabuza was shown the red card early on in the game forcing the Buccaneers to play the majority of the match with 10-men.

Pirates who came into the game on the back of a three-game win-less run, made their intentions clear from the onset in search of an early goal.

The visitors blew three great chances to open the scoring within the opening 10 minutes – two saw Gabuza fail to hit the target, while Vincent Pule had the clearest opening within the first 30 seconds after kick-off but was unable to get the better of goalkeeper Rotshidzwa Muleka.

Pule tried his hand again in the 25th minute when he whipped a left-footed effort toward goal direct from a free kick, but the ball flashed just over the crossbar and rippled the top of the netting.

Just a minute later Muleka was on hand again to push away Pule’s volley, while the rebound fell for Gabuza but his acrobatic effort was bravely blocked by Leopards defender Thivhavhudzi Ndou.

Pirates broke the deadlock in the 34th minute via an own goal by Ndou.

Upon the start of the second half Gabuza was shown the red after reappearing from the change room, leaving the Sea Robbers to continue with 10-men for the rest of the game.

Despite their numerical disadvantage, Pirates doubled their lead in the 65th minute. Xola Mlambo played a fine ball over the top of the defence and Pule this time kept his composure in front of goal, easing the ball past Muleka to make it 2-0.

Lidoda Duvha appeared to be down and out, but in the 70th minute they received a lifeline in spectacular fashion. Substitute Joseph Mhlongo saw his initial shot on the edge of the box blocked, but the ball looped up and fell kindly for him to have a second attempt – this time he ripped an unstoppable left-footed volley into the top corner to reduce the deficit.

That was to be as good as it got for the hosts, who were unable to create any further openings.

With this win Pirates go into the International Break with a morale boost, allowing the technical team to get the team firing again ahead of their next league encounter against SuperSport United in two weeks time.

Condolences to loss of life