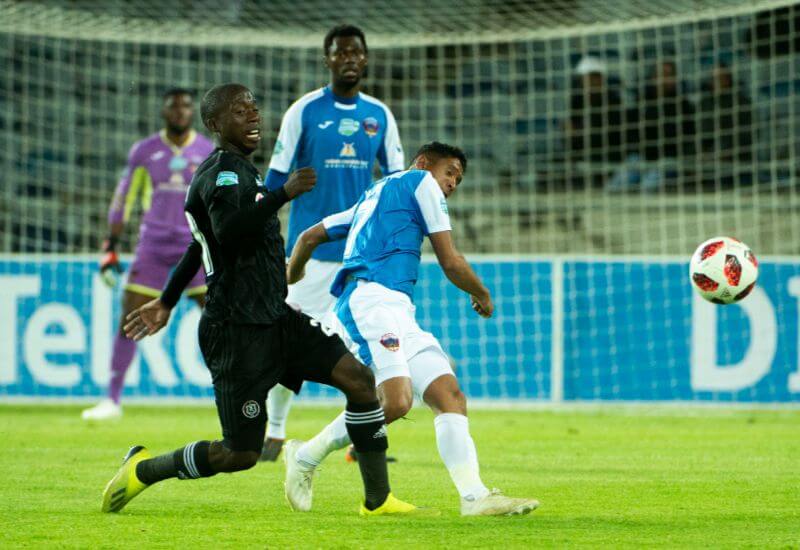 Orlando Stadium was gripped by cup fever as the Buccaneers edged into the quarterfinals of the Telkom Knockout with a 1-0 win over Chippa United.

It would be the Buccaneers who were the early aggressors as the looked to dictate terms from the beginning. Zambian international Augustine Mulenga had the earliest chance to fire the Bucs into the lead, were it not for the quick thinking Daniel Akpeyi, who saved at his feet.

Former Bucs midfielder Thabo Rakhale asked the question of the Bucs defence with a shot that sailed over Jackson Mabokgwane’s goal, in sustained period of Chippa attacks which kept the Bucs pinned in their defensive third.

Mulenga and his fellow countryman Justin Shonga traded opportunities upfront for the Bucs as both men looked odds on to score, but for the efforts of Akpeyi once again proving to be a thorn in their sides.

Musa Nyatama, the reigning Orlando Pirates Player of the Season came close to opening the scoring as the half drew to a close, when he raced to the near post to get onto the end of a whipped corner. He couldn’t guide his side foot flick goalwards however, watching the effort sail over the bar.

Both sides went into the break level at 0-0.

The second half saw the Bucs make a change, introducing Vincent Pule for Mulenga, and immediately the home side were on the front foot.

Shonga had two opportunities to put the Soweto Giants into the lead, but his free kick went narrowly wide of goal, followed by a swivel and shot inside the box that was saved by Akpeyi.

Brazilian defender Caio Marcelo also came close, getting onto the end of a loose ball from a Pule corner. With a third consecutive start, the Bucs man was in the right place at the right time as he attempted to side-foot home the loose ball, only to be blocked by another former Bucs man, Daine Klate, who was marshaling the near post.

In a night that epitomized the mantra of ‘Once a Pirates’... it would be another who was on the home side roster, Tercious Malepe, who looked to ply misery on his former employers. Pirates’ defence was caught napping and Chippa flooded the box, leaving Malepe unmarked at the far post. He wasn’t leaning back as he took his shot, sending the ball into the stands with Mabokgwane at his mercy.

The Buccaneers would make Chippa pay for Malepe’s miss as they immediately broke from the goal kick. Xola Mlambo found space down the right before playing in a dangerous driven ball into the box for the onrushing Pule, who tucked home under pressure from the keeper and his defenders.

Chippa United began to enjoy an undue amount of possession in attack, as they chased the equaliser. Klate with two opportunities from free kicks, both of which not having the desired effect for his new club.

The Buccaneers held on in what became a tense defensive effort, and saw themselves into the quarterfinals of the Telkom Knockout.