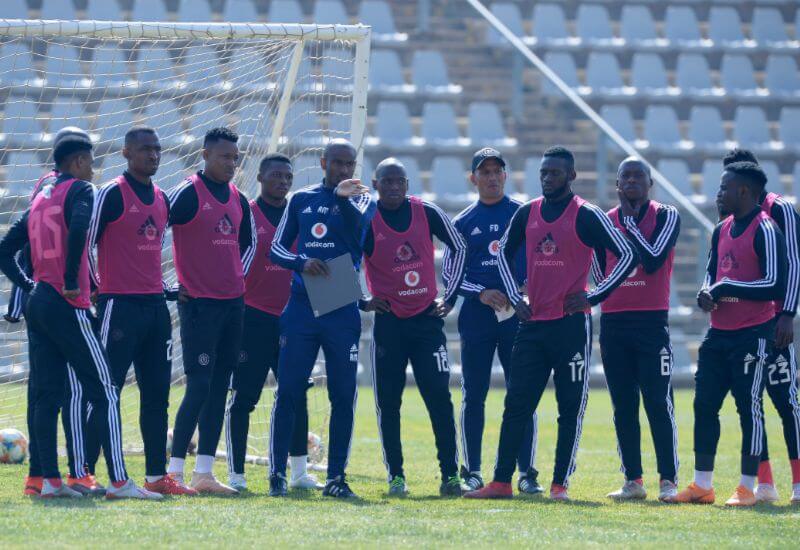 Micho Sredojevic, Rhulani Mokwena and Fadlu Davids have been hard at work over the last two days as they prepare for their upcoming MTN8 Cup clash.

The three-man Brains Trust are eager to steer the Buccaneers ship back to calmer waters and bounce back to winning ways when Orlando Pirates play host to Highlands Park on Saturday.

Wednesday evening’s defeat at the hands of SuperSport United was Pirates’ second on the trot following their unexpected 1-0 away defeat in the CAF Champions League last weekend.

Defeat to the Lions of the North, would mean a third straight loss – something the Bucs trio have not tasted since coming together as a technical team.

However, in Highlands Park they face an adversary that they failed to defeat in two outings last season, with both games ending in stalemates.

One thing for sure this weekend is that there will be no draw because this is a cup game and there has to be one winner and one loser.

Last year, Orlando Pirates were dumped out in the first round of the competition by SuperSport United via a penalty shootout. Once again, the Buccaneers will be playing in front of their home supporters at the Orlando Stadium but the Ghost will be expecting a different outcome, something Sredojevic is well aware of.

“There is no running away from the fact that we have under-performed in the last two matches we have played,” said Mokwena. “As I said following our defeat (to SuperSport United), our supporters deserve better from a team like ours and for that reason we have to double our efforts to ensure we get a favourable result on Saturday.”

“Obviously it won’t be easy because Highlands Park are a tough side. This is a hard-running team with players who can influence the match single-handedly. We will give the opposition the respect they deserve, but having said that, we will also give our all to secure a victory.”

Tickets for this encounter are already on sale nationwide.