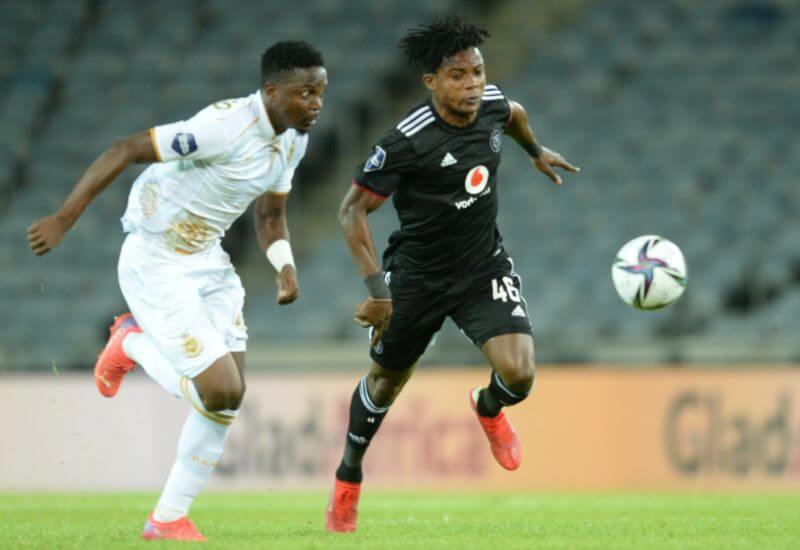 Orlando Pirates were held to a 1-1 draw by Royal AM as league football returned to Orlando Stadium on Thursday evening.

The Buccaneers coaching duo of Fadlu Davids and Mandla Ncikazi made minimal changes to the side that started the last league game, with midfielder Abel Mabaso the only player re-introduced to the starting XI.

Few could have anticipated the frantic pace of the opening five minutes, where each side was awarded a free-kick in a promising area.

The first set-piece fell to the hosts just seconds from kick-off after Linda Mntambo was brought down at the edge of the box.

The Bucs midfielder dusted himself up to take the free-kick, beating the wall before forcing a save from Royal AM keeper, Hugo Nyamé. This was moments before Tshegofatso Mabasa came close to opening after being played in by Fortune Makaringe, but fluffed his lines as he rushed his shot.

The action slowed down towards the 20-minute mark, and things continued in that vein until the 33rd minute, when miscommunication between captain Happy Jele and goalkeeper Siyabonga Mpontshane allowed the dangerous Victor Letsoalo to lay the ball for the unmarked Levy Mashiane, who made no mistake in edging the visitors ahead.

The Buccaneers went in search for the equaliser, but without making inroads.

This was until the stroke of half time when an error from Nyamé gave Mabaso the opportunity to release Mntambo, who slotted home to draw level.

The second half was a more physical affair, with the hosts losing Jele to an injury after a challenge from Letsoalo.

This, however, did not deter the Buccaneers’ search for three points, as they got close after Bandile Shandu found Mabasa inside the box in the 62nd minute, only for Nyamé to position himself well enough to make the stop.

Mntambo had another opportunity late in the game when he went for goal from the edge of the box, but skewed his shot wide.

At the other end, Mpontshane was called upon to make a fine block when he left his line to unsettle a marauding Letsoalo well into injury time.

Despite both team’s best efforts, there were no further goals as Pirates remained in seventh place after collecting a point.