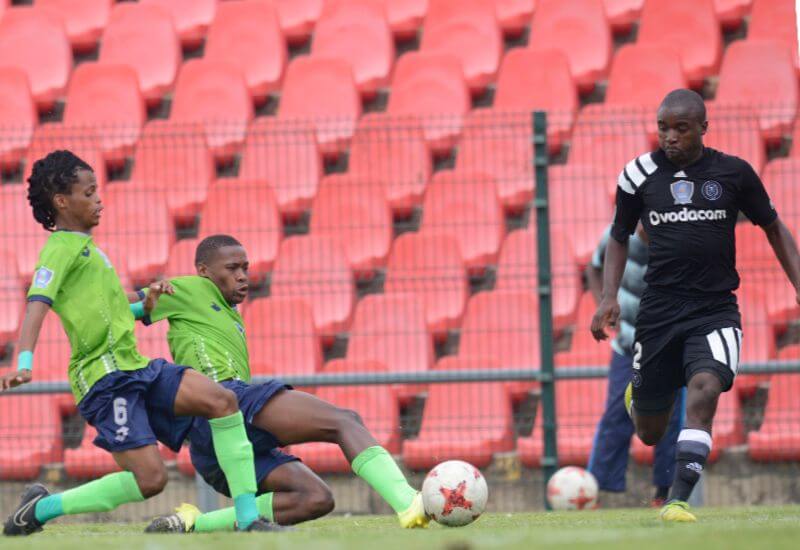 Orlando Pirates put their Multichoice Diski Shield campaign back on track in emphatic fashion after they smashed a hapless Platinum Stars 6-1 at Rand Stadium on Sunday afternoon.

Following a disappointing last minute 1-0 loss to Bidvest Wits last weekend, the Buccaneers needed to bounce back with a win in their second game to stand any chance of qualifying for the knockout phase of the inaugural reserve team competition.

To say that the home side were quick off the mark would be an understatement, as they opened the lead in the opening minute. Bongokuhle Maphumulo has found much joy of late as an offensive fullback, and his efforts were rewarded as early as kickoff when he went on a deep run into the box to rifle home from close range.

The Bucs kept the pressure on Dikwena and almost extended their lead when Lyle Foster broke clear of the defence and found himself one-on-one with Nhlakanipho Duma in the Stars goal and fired straight at the keeper.

It wouldn’t be too long after that when the Bucs found their breakthrough, again from the defence, when Reanetse “Shoes” Ramatlapeng defied his nickname by heading home for 2-0 as he rose to get onto a cross at the far post in the 13th minute.

Foster made it 3-0 only minutes later after a powerful run through the Stars midfield. The Bucs striker did well to get around the keeper while holding off the defender, who was pulling him at every turn. Foster showed good strength to see off his man and tap into the open goal.

Dikwena were under insurmountable pressure after the third Bucs goal and the pressure finally told, when captain Lehlohonolo Mtshali tried to play in Thobela Sikhakhane, only for the ball to be handled in the box by an errant Stars hand. Grant Peters casually stepped up to take the kick, only for Duma to guess correctly and keep out the tame effort.

Stars managed to pull one back after an enterprising attack down the Bucs right. With Maphumulo deep into enemy territory, his recovery was not good enough and Dikwena exploited the space, forcing Ramatlapeng to shift out of position to cover the gap, leaving a space behind him. A low cross from Andile Makanya found Thembelani Majingo in acres of space in the box to side-foot home from inside 6 yards.

Both sides went into the break at 3-1.

The second half started much the same as the first, with the Bucs on the attack from the first whistle. It was wave after wave of Black & White attack, with Dikwena refusing to be breached.

But the resistance gave in after 65 minutes when fullback Lethabo Mazibuko worked his way into the box and turned inside onto his right foot before firing a powerful shot into the bottom corner of the goal.

The Bucs maintained their push for goals but it was not to be as the final score remained at 6-1.

The Buccaneers will go into their final group game against Kaizer Chiefs knowing that a win see them through to the knockout stages at the expense of their biggest rival. The match will be played at the Vosloorus Stadium on Sunday, 26 April.