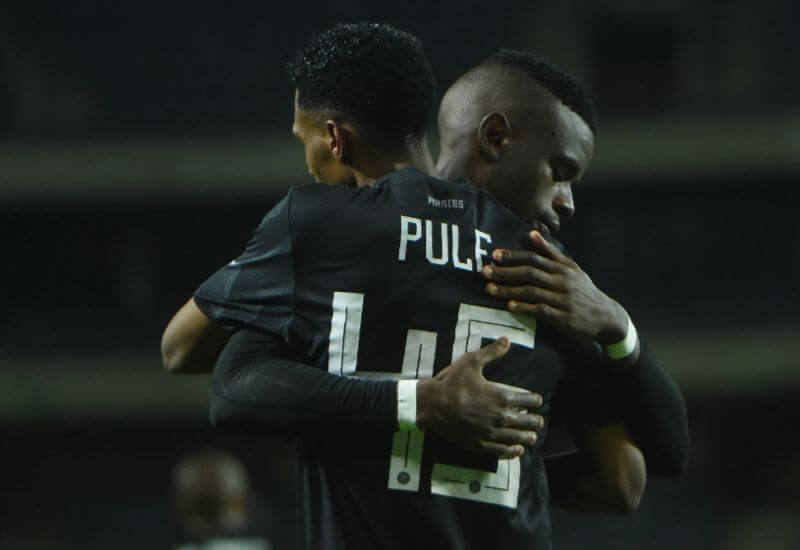 Orlando Pirates have moved to within two points of log leaders Bidvest Wits following their 4-2 win over Chippa United in an Absa Premiership encounter played at the Orlando Stadium on Tuesday night.

The Buccaneers came into this clash knowing that nothing but a victory would be enough if they are serious about challenging for the title.

An opening goal from Happy Jele as well as own goal by Phetso Maphanga set the tone for the evening as it rained goals on the night, with the second half seeing Vincent Pule and Kudakwashe Mahachi add the final nail in the Chippa coffin.

The Buccaneers started the match brightly as they managed to grab an early goal with the Chilli Boys defence caught ball-watching just three minutes into the game. The hosts were awarded a free kick after a foul on Thembinkosi Lorch, and the in-form attacker dusted himself off and took the free kick which found an unmarked Jele in the box who headed home the opener.

Where it looked like Pirates would push on for a second goal, it was Chippa who would find the back of the net courtesy of the craftsmanship of Mark Mayambela in the 23rd minute.

The former Buccaneer worked his magic on the edge of box before playing a pass which the Pirates defence failed to deal with. Tebogo Tlolane latched onto the loose ball and fired his shot between the legs of the onrushing Siyabonga Mpontshane.

Not to be outdone by the visitors, Pirates responded with a flurry of attacks of their own and were duly rewarded for their efforts with Maphanga heading Innocent Maela's cross into his own net.

The left back was substituted shortly afterwards by Chippa coach Joel Masutha.

The hosts continued to pile on the pressure and almost made it 3-1 in the 38th minute but they were denied when Daniel Akpeyi smothered Musa Nyatama's goal bound strike.

The visitors were able to contain the home side and Pirates carried a 2-1 lead going into the interval.

The Chilli Boys’ resistance would be broken in the 56th minute when Pule was brought down by Gerald Modisane, after the latter fluffed his clearance which fell to the onrushing Pule. The referee pointed to the spot and Pule coolly slotted home from 12 yards.

The Pirates defence went to sleep and they were punished by Chippa in the 67th minute when Innocent Maela scored an own goal from a Chippa United corner kick that was poorly dealt with.

Mahachi, came on late in the game and continued where he left off from the game against Highlands Park to score Bucs' fourth goal shortly after coming on for Augustine Mulenga. That goal would prove to be the final significant action of the match.

With this win, Pirates can now focus on the not-so-small business of the CAF Champions League over the weekend.

The Buccaneers travel to Zimbabwe where they will play against FC Platinum.