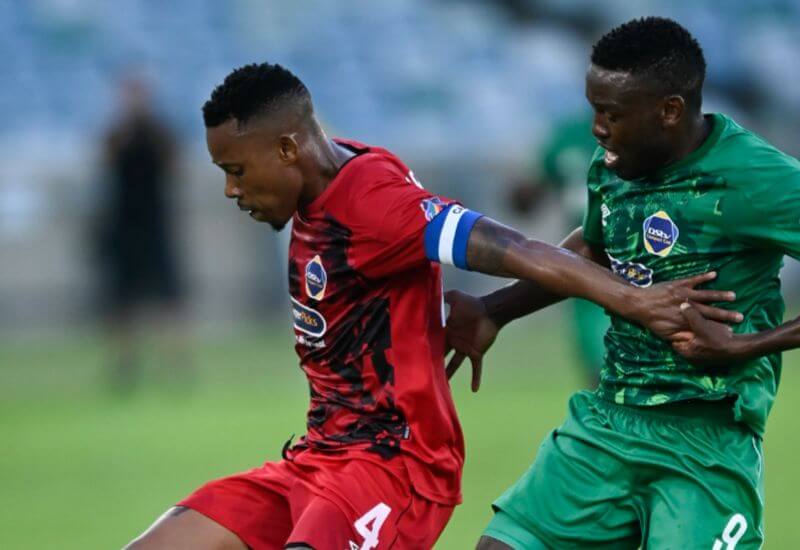 Orlando Pirates players shelled out some solid performances as the Warriors beat AmaButho 2-1 in the second semifinal of the DSTV Compact Cup at Moses Mabhida Stadium on Saturday.

The Warriors outfit was laden with Buccaneers, who made up almost half of the starting lineup, with the experienced Happy Jele skippering the side.

There was a subdued start to the encounter as combinations from both camps took some time to gel.

The Warriors defence was almost caught napping during the game’s first corner kick when Siyethemba Sithebe snuck behind near the far post to head towards goal, only to send his header wide of the target.

Set-pieces appeared to be somewhat of an Achilles heel for the men in red early on, with Marks Munyai almost turning a Sithebe free-kick into his own net in the 14th minute with an attempted headed clearance.

Having not had much goalmouth action to draw from in the early exchanges, the Warriors sprung to life near the half-hour mark, with Bucs striker Kwame Peprah pushing forward inside AmaButho’s penalty area, only to be denied by a vital block from Veli Mothwa.

With halftime approaching, Nkosingiphile Ngcobo also came close to opening the scoring for the Warriors, as he gathered a loose ball just inside the box before firing wide of the target.

What was overall an uneventful first half was followed by a livelier second period, following the introduction of Buccaneers midfielder Fortune Makaringe in place of defender Njabulo Ngcobo, while Thembinkosi Lorch was withdrawn in favour of Swallows striker Ruzaigh Gamildien.

This afforded the Warriors more attacking impetus, and the pressure on the opposition told almost immediately as the deadlock was broken when a stray pass from Sithebe landed inside his own net to leave AmaButho trailing in the 49th minute.

Not content with just a 1-0 lead, the men in red could have gone two-up through Makaringe, who was on the end of a cross from Gamildien but only succeeded in finding Mothwa’s gloves.

After a bit of sparring between the two sides, AmaButho hit back through Nkosinathi Sibisi, fired in from close range after collecting the rebound from a fine block from Itumeleng Khune.

With scores back level, the team in green sought to pull ahead, and almost did so in the 73rd minutes when a seemingly unmarked Bonginkosi Ntuli just needed to fire into the net, only to be denied by a superb tackle from almost out of nowhere by Captain Jele.

The decisive moment came at the other end in the 87th minute through a moment of magic from one of the Bucs’ newest signings Mmonapule Saleng, who has spent the season on loan at Swallows. The 23-year-old received the ball from out wide before unleashing a powerful left-footed shot into the far corner to restore the Warriors’ lead.

With not much time left on the clock, there wasn’t much opportunity for AmaButho to launch a comeback as the Warriors held on to secure a spot in the final, where they will face off against Coastal United at FNB Stadium next Saturday.