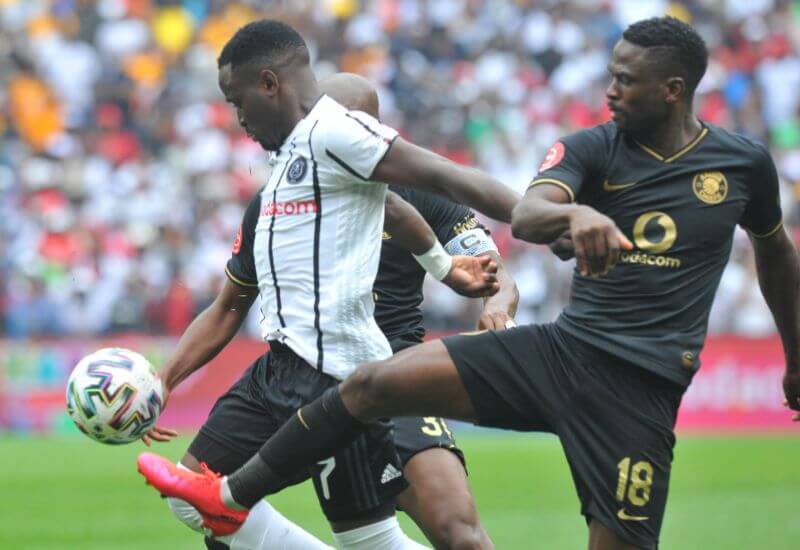 Orlando Pirates were undone by a solitary goal, as they saw a near perfect Absa Premiership run under Josef Zinnbauer come to an end with a 1-0 defeat at the hands of Kaizer Chiefs on Saturday afternoon at the FNB Stadium.

The Buccaneers’ resurgence under mentor Josef Zinnbauer has been something of a fairytale, with an unblemished league run where they’ve been unbeaten in eight, with seven wins and a draw leading up to the weekend showpiece.

Things started briskly as both sides looked to make an early mark in the game. Kearyn Baccus managed to get the first shot at goal, which was blocked by Vincent Pule inside the Bucs box.

It was the Buccaneers’ turn to attack, and they almost made it count in the 14th minute when Innocent Maela’s long ball down the flank found Thembinkosi Lorch in space. The Bucs attacker turned to clip a cross towards Luvuyo Memela who nodded back inside to Gabadinho Mhango, only for the Malawian marksman to fluff his shot from close range.

Daniel Akpeyi was the busier of the two goalkeepers in the opening exchanges, as he was called upon once again to stem the Pirates tide. Memela and Lorch kept the big Nigerian glove man on his toes with a bevy of crosses into the box, which he dealt with cleanly.

It would be Chiefs who would open the scoring on the half hour mark, after Lebogang Manyama fired home from the edge of the box. Manyama picked up a pass from wide on the left, before cutting inside to fire a shot at goal, beating Wayne Sandilands low to his left.

Manyama would be in the thick of things once again as he flashed a free-kick over the bar from outside the box, before Bucs turned to attack, with Lorch and Mhango combining before the latter glanced his header just wide of goal with half time looming.

The second half saw a more resurgent Bucs outfit, which threw everything into getting back in the game. Lorch and Pule looked to force a way back for the home side, but the Amakhosi defence held firm, with Mulomowandau Mathoho and Akpeyi leading the rearguard.

Akpeyi would have his moment of the match, as he pulled off three saves in quick succession, denying Memela and Lorch from close range before pulling off a third save from a long range effort.

The Bucs would continue to pile on the pressure, racking up double figures in the corner count, but the Chiefs goal remained unbreached.

The match would end 1-0 as Kaizer Chiefs took all three points in the Derby, opening a nine point gap between the two Soweto Giants.