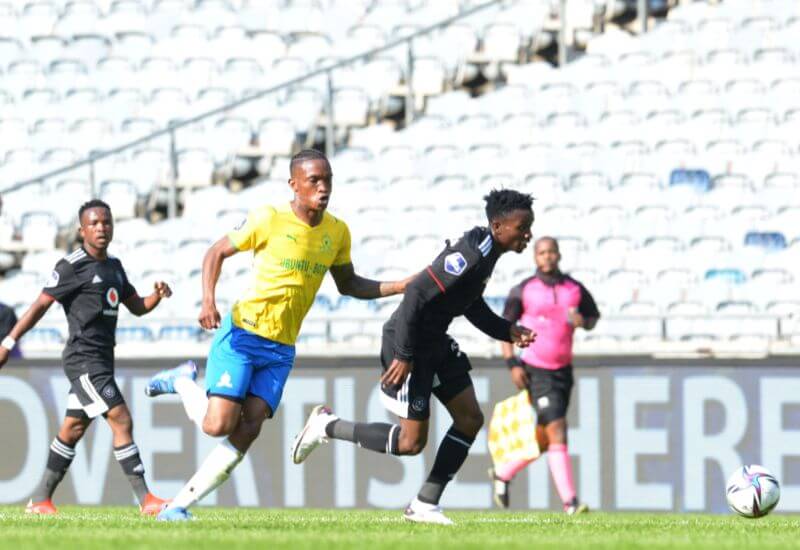 Orlando Pirates went down to 2-0 to Mamelodi Sundowns, when the two South African football giants met at Orlando Stadium on Saturday afternoon.

Coming against a team yet to concede a goal in the ongoing league campaign, the Buccaneers knew that a bit extra would be required if they were to add to their six goals scored so far this season.

In spite of that, the first real chance came at the other end in the seventh minute when former Pirates player Thabiso Kutumela unleashed a shot from range which floated just wide of the target.

Next to have a shot at goal was Vincent Pule, who after spotting Denis Onyango off his line, went for goal from the touchline, only to send his shot to the back roof of the net.

The best chance of the first 45 came from Bandile Shandu, who made a terrific run down the right before forcing a shot from Onyango from a tight angle.

The visitors would take the lead nine minutes into the second half when Peter Shalulile shot past Mpontshane to make it 1-0.

There were chances at the other end, the best of which came from Vincent Pule who forced a deflection towards goal off Rushine De Reuck, which was kept out by Onyango.

While the Buccaneers controlled matters in their half, the next goal would come from Sundowns and it was Shalulile again who scored to make it 2-0 following a foiled attempt by the home side to play the ball out from the back.

Pirates had a late chance to half the deficit in the 82nd minute when Tshegofatso Mabasa shot from point-blank range only to be denied by Onyango.

Second-half substitute Kabelo Dlamini was the next to find a path through to goal, but the Brazilians’ shot-stopper was again equal to the task.

In the end, it proved not to be the Buccaneers' day, as their opponents walked off with all three points on the day.