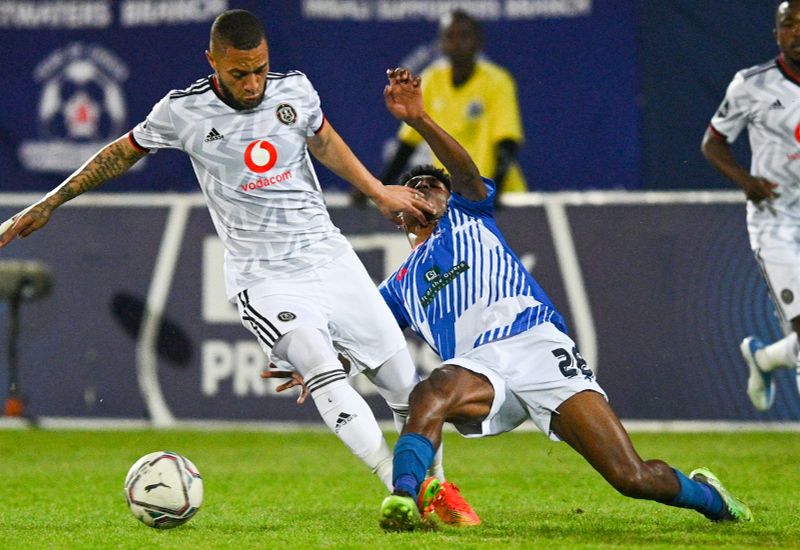 Orlando Pirates were upset by Maritzburg United on their return to league action, with the Team of Choice claiming a 1-0 win at Harry Gwala Stadium on Sunday night.

Heading into the clash on the back of two wins in successive matches, the Buccaneers went into the clash looking to extend their excellent run against the Team of Choice, who had gone winless in this particular fixture for 11 games running.

Most possession in the opening exchanges fell to the visitors, who were not able to make the most of their early advantage with the home side quick to close up shop.

There was an elongated stoppage midway through the first half after a floodlight failure and just shortly after the hold up in play, the Buccaneers had an opportunity through Fortune Makaringe, who was played in by Paseka Mako before being guided out of play by some stout defensive play from Maritzburg.

After a quiet start to the encounter, Bucs goalkeeper Richard Ofori was called into action when he had to stop Tumelo Njoti, who got on the end of a counter from the hosts.

The Ghanaian international’s reflexes were again required deep into injury time towards the end of the first 45 as he had to make a low dive to his right to keep things scoreless as the teams went into the tunnel.

The opening goal could have come through Pirates skipper Innocent Maela, who leapt high to meet a fine ball into the box as the visitors were awarded a free-kick minutes after the second half, but could only send his header wide of the target.

More opportunities fell to the Buccaneers, who failed to capitalise after a scramble inside the penalty area just before the hour mark, with Bienvenu Eva Nga’s shot at goal kept out by the defence. This was just before Zakhele Lepasa went one-on-one with King Ndlovu, whom he successfully chipped before his shot rolled wide.

The Soweto Giants were left to rue their missed chances as a penalty was awarded to the home side after Olisa Ndah was deemed to have committed a foul inside the box with ten minutes left on the clock.

Former France youth international Amadou Soukouna stepped up to the penalty spot, and his well-struck shot evaded Ofori as he opened the scoring.

Pirates’ attempts at drawing level proved futile, despite enjoying a fair share of the possession in the game’s closing stages.

It was to be a woeful night on the road for the Buccaneers, who went away empty handed at the end of the day with the Team of Choice claiming all points on offer.