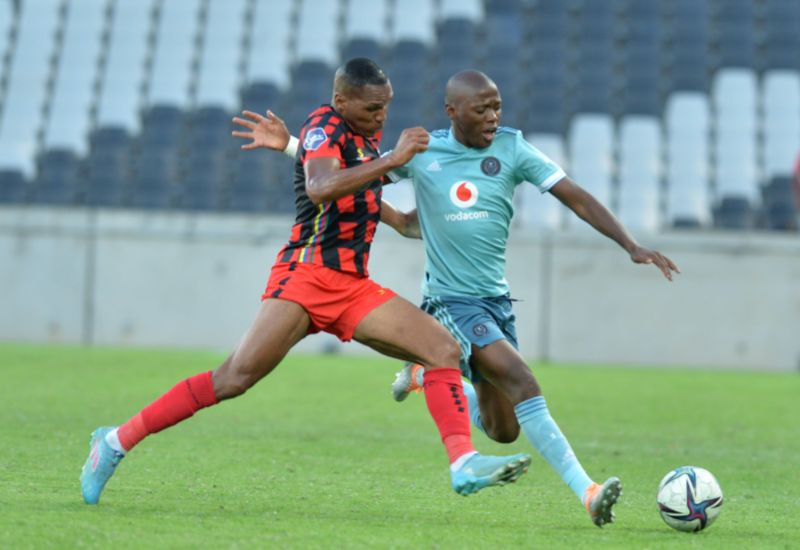 Orlando Pirates suffered a shock defeat away from home in the DStv Premiership, as they went down 1-0 to TS Galaxy at Mbombela Stadium on Monday afternoon.

Having not won in each of their last two league encounters, the visitors were looking to revive their bid for continental football while travelling to a side desperate for respite from the threat of relegation.

The game’s early chances all fell to the Buccaneers, with Thembinkosi Lorch firing goalward from long range after spotting Galaxy goalkeeper Melusi Buthelezi off his line seven-minutes in, but only succeeding in curling his effort wide of the target.

Pirates were presented with another opportunity a minute later, this time from a corner, as captain Happy Jele and Ntsikelelo Nyauza both had touches inside the box before Terrence Dzvukamanja shot over the bar from point-blank range.

The Bucs skipper was again in the thick of the action around the half-hour mark, this time flicking goalwards with a header that missed the target by mere inches.

With the visitors committing numbers forward, the home side were able to catch them out on a quick transition a few times, and that strategy paid off in the 34th minute when Lindokuhle Mbatha eliminated both Richard Ofori and Jele down the right flank before laying it for an unmarked Lifa Hlongwane, who had an empty net to shoot into as he made it 1-0.

Galaxy’s defence held up firm as Pirates chased the equaliser, coming close as Abel Mabaso shot wide from a distance in the 43rd minute, following an attempt to catch the hosts off guard from a corner kick.

There was a bright start to the second half from the home side, with Ofori called upon two minutes in to deny Sphiwe Mahlangu in a one-on-one situation.

The Soweto Giants got close at the other end as Goodman Mosele shot just over the bar from the edge of the penalty area.

Just before the hour-mark, a moment of magic from second-half substitute Kwame Peprah could have benefitted the visitors when a clever touch broke him free down the right flank before attempting to find Lorch, who was a split-second late to the ball just in front of goal.

There were chances for Zakhele Lepasa and Fortune Makaringe as the clock wound down, with the latter coming the closest to finding the equaliser by forcing a save from Buthelezi at point-blank range.

The day however belonged to the home side, who denied Pirates of any points from the encounter, leaving them in fourth place on the standings with three matches left to be played.