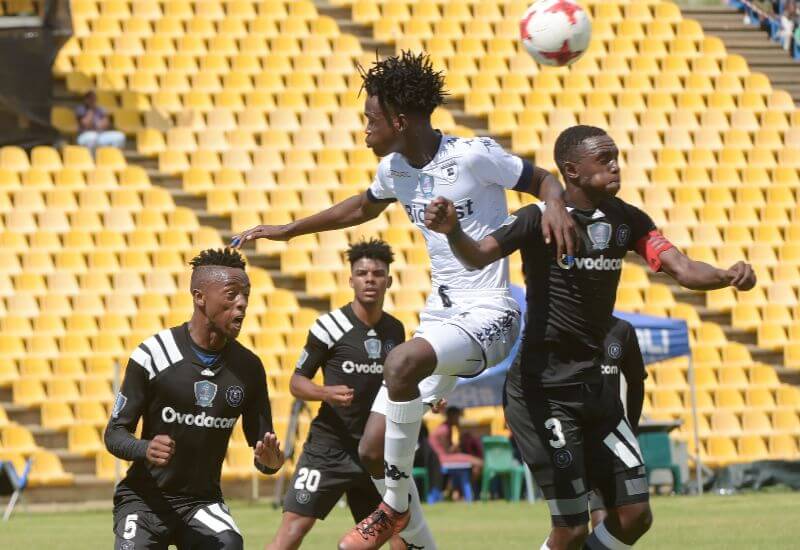 Johannesburg travelled to the Free State when Orlando Pirates took on Bidvest Wits in the Multichoice Diski Shield at the Kaizer Sebothelo Stadium on Saturday afternoon.

With this being the opening match of the region-based competition, the Buccaneers looked to get their campaign off to a flying start by beating their cross-town neighbours, Bidvest Wits.

After a scrappy opening exchange, the Bucs looked odds on to open the scoring when Grant Peters broke down the left and laid a lovely pass to Yanga Baliso on the right. The well-weighted pass split the defence but Baliso failed to capitalise as he tapped it straight at Sanele Tshabalala in the Wits goal.

Baliso turned provider moments later as he did well to keep possession on the right before clipping a dangerous ball to the centre of the small box. Lyle Foster did well to lose his markers and rise for the header, but the youngster failed to pick a spot as the keeper made light work of his effort from close range.

Orlando Pirates’ defence were caught napping midway through the first half when they failed to deal with a Wits corner on the second ball. Brooklyn Poggenpoel found a pocket of space and fired at goal, for Kopano Thuntsane to save smartly at his near post.

The defence was breached once more as Ethan Andrews got onto a loose ball in the Bucs area, only for Thuntsane to smother, much to the relief of centre back pairing Reanetse Ramatlapeng and Fezile Gcaba. Thuntsane was called upon once more when Wits came attacking down the right before firing at goal for the Bucs keeper to pull off yet another save to keep his side in the game.

The Soweto Giants started the second half much in the same way as they did the first, looking to be the early aggressors. A neat build up between Baliso and defender Bonga Maphumulo saw the Bucs knock their way into the final third, but for the referee’s assistant to flag them down for offside.

Maphumulo, who found himself playing in an advanced position, fired a cross into the danger area with Foster throwing his head to it but narrowly missing the ball. It fell to Lethabo Mazibuko who was coming in with a deep run from left back. The youngster fired at goal but Tshabalala was well placed to block the powerful effort.

The Buccaneers thought they had opened the score in the 70th minute when Maphumulo on the overlap played an exquisite ball across the face of goal. The teasing delivery drew Tshabalala off his line and out of position, for Foster to nod home at the far post. The keeper was beaten but the cover defence of Poggenpoel spared his blushes, as the headed effort was cleared off the line.

Sanele Tshabalala, who was the standout performer in the Wits goal in the first half, began to have a wobble deep in the second half as he failed to deal with two set-pieces from the Bucs' left. He came out to collect a corner but missed out as the ball fell to Maphumulo, who blazed wide. The pressure on goal continued to mount as Tshabalala then flapped at a dangerous ball but the Bucs failed to capitalise on the mistake yet again.

With a minute left on the clock, Bucs’ hearts were broken when Molahlehi Khunyedi was given plenty of space and time on the ball to cut inside and fire a curler into the top corner, leaving the outstretched Thuntsane with no chance.

The game ended 1-0 to Bidvest Wits.