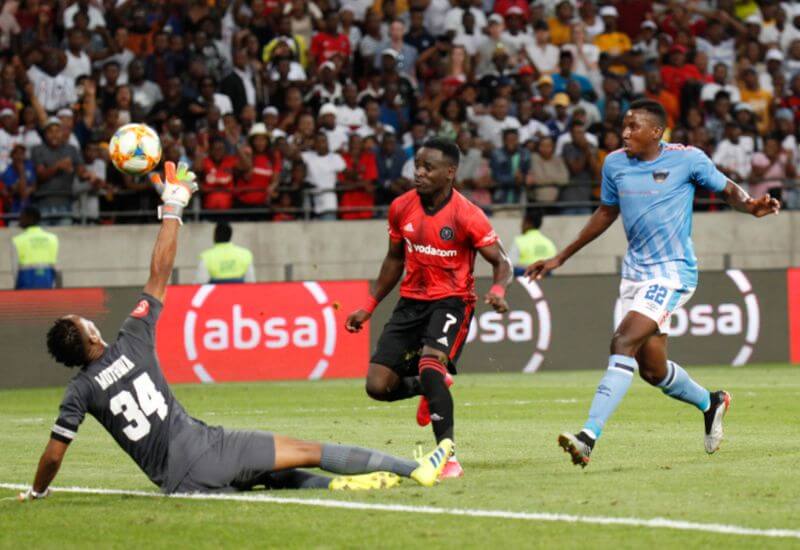 The Buccaneers were looking to claim a fifth straight win, having enjoyed a consistent run of results since the beginning of the year.

Wayne Sandilands was the first of the two keepers to be called upon, diving low to stop a tame shot from the home side.

It was at the other end where the first real threat at goal came, with Gabadinho Mhango getting close to his 13th of the season, only for Chippa skipper Veli Mothwa to land a vital fingertip, which sent the ball onto the upright to deny the Malawian in the seventh minute.

The Buccaneers would not rue the let-off for too long, as Innocent Maela made a foray into the opposition box, only to be fouled - prompting the referee to point to the spot.

Up stepped Mhango, and the red-hot striker was not going to miss from that range, slotting past Mothwa to put Pirates ahead.

Sandilands was again on hand to stop Thabo Rakhale soon after the opening goal, again diving low to keep the threat out.

That save would prove priceless as it kept the Buccaneers’ one-goal lead, which would be doubled by Mhango who kept a cool head inside the Chippa box to bag his second on the day.

Chippa pulled one back on the half-hour mark through Augustine Kwem, who beat Sandilands to reduce the deficit.

Waves of attack could not restore Pirates two-goal lead, and the best of these chances came right on the stroke of halftime when Thembinkosi Lorch was denied by Mothwa after the two went one-on-one.

Halftime-sub Ruzaigh Gamaldien could have drawn level early in the second half  after getting two chances within a minute of each other, with Sandilands making a crucial save before the new man’s next shot was deflected away from goal.

It took Pirates until the 60th minute to get their first real chance of the second stanza as, after a free-kick, Chippa failed to clear the ball, allowing Ntsikelelo Nyauza to unleash a volley, which was cleared off the line.

Three minutes later, Mhango could have completed his hat-trick, but Mothwa was proving to be impenetrable in one-on-one situations, making a brilliant save to keep the scoreline at 2-1.

It was, however, the hosts who dominated proceedings in the second half, which called for a solid defensive effort from the Buccaneers, who held on well in the face of a barrage of attacks.

It was enough to secure three points that saw them climb up to second in the standings, nine behind rivals, Kaizer Chiefs.