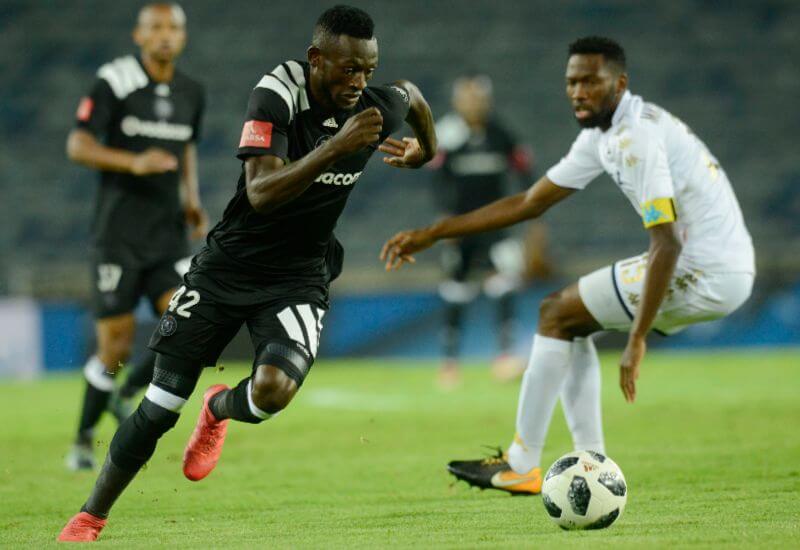 Orlando Pirates took The Clever Boys back to school as they dished out a footballing lesson in their 4-0 demolition of Bidvest Wits in an Absa Premiership match played at the Orlando Stadium on Wednesday night.

Barring the empty stands in Orlando Stadium, the match had everything from an own goal, penalties and even a brace.

The hosts came into this match knowing that nothing short of victory would be enough if they were to catch runaway leaders Mamelodi Sundowns. However, coming into this match head coach Micho Sredojevic was without key players such as Thembinkosi Lorch – who has been ruled out for the rest of the season and midfielder Mpho Makola who was serving his one match suspension.

The absence of these players meant that Augustine Mulenga would be handed a rare start and the Zambian international grabbed the opportunity with both hands.

It took just 12 minutes for the Buccaneers to get onto the scoresheet courtesy of an own goal from Wits defender Sifiso Hlanti, who failed to deal with a cross from Mulenga.

Shocked into action, Wits upped the ante as they looked to score an equaliser with Vincent Pule causing problems for the Pirates defence, however, the relentless back four absorbed the pressure, and almost against the run of play, it was 2-0 for the Buccaneers.

Mulenga latched on to a misplaced back pass from a Wits defender to coolly slot his shot past the keeper in the 35th minute.

Mulenga was in the thick of things five minutes later after he was fouled in the box by Nazeer Allie. Countryman Justin Shonga stepped up to take the spot kick and finished superb to send the Bucs into a 3-0 first half lead.

The final nail in the coffin came in the second half with that man Mulenga, once again involved in the finish. Luvuyo Memela surged down the right flank before delivering a pin-point cross which was neatly finished off by the reigning Zambian Player of the Year.

The last ten minutes of the match belonged to Wits as they tried to score that elusive consolation goal, and they were almost rewarded in the 83rd minute after some careless play at the back by Siyabonga Mpontshane saw former Bucs striker Lehlohonolo Majoro intercept the keeper’s pass before at goal. Gladwin Shitolo reacted quickly and was on hand to clear the goal bound strike off the line.

Wits got the opportunity to score after they were awarded a penalty in the 85th minute following a foul on Majoro by Diamond Thopola. Majoro stepped up to take the penalty but Mpontshane read the shot perfectly, diving smartly to his right to deny the Wits marksman.

Pirates’ defence closed shop and the game ended 4-0, securing all three points for the home side.

With this win the Buccaneers secure second place for the first time in six years and also qualify for the CAF Champions League.