Bucs through to group stages 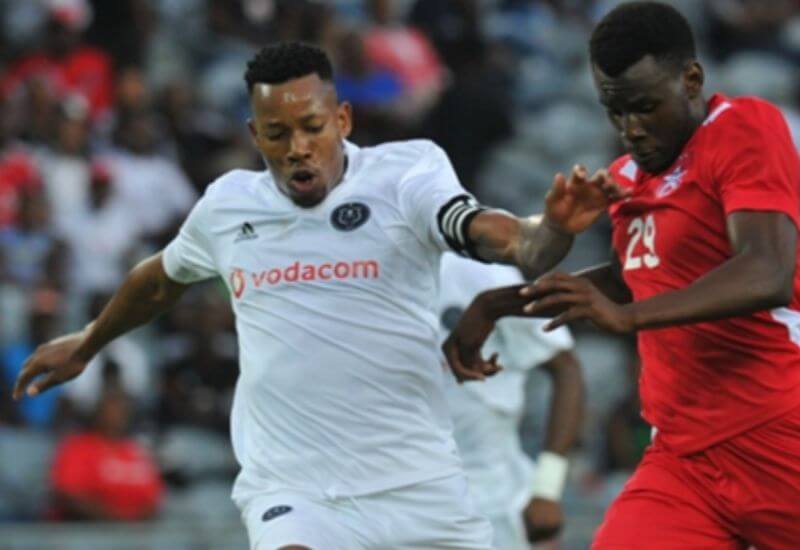 A solitary strike in a crowded box was enough for Orlando Pirates to see off African Stars and qualify for the group stages of the CAF Champions League on Saturday afternoon.

Going into the second leg on level terms after the unexpected 0-0 draw at Orlando Stadium, the Buccaneers had it all to do in Windhoek to deliver on the first promise of reaching the crucial phase of the competition.

Bucs started brightly with Augustine Mulenga forcing a corner in the opening minutes, which was headed on target by Happy Jele. It would soon be Innocent Maela’s turn to get into the end of a Justin Shonga setpiece moments later, he too not finding the goal as his header went wide.

Stars managed to find their feet and build some momentum in the 15th minute with an attack of their own, but the Bucs rearguard remained resolute in cutting out the sustained threats by the home side.

The visitors would make their possession count as found the back of the net from the unlikeliest of sources, when Marshall Munetsi ventures forward down the flank. His deep run profited from a ball that bounced in his favour before the defender stroked home for what he thought was the opener, but for the attentions of the offside flag.

Orlando Pirates maintained their pressure but couldn’t break through the Stars defence and both sides went into the break with the scores tied at 0-0.

The second half started much in the same way as the first, with the Bucs being the early aggressors. Vincent Pule found Mulenga unmarked in the box with his cross but the Zambian’s header came back off the woodwork with the keeper beaten.

It would take almost an hour for the Stars defence to be breached when Shonga found the back of the net for a crucial away goal. Pule sparked the attack with a well-connected pass to Thembinkosi Lorch who found Shonga in the box. The Zambian hitman has two shots saved in quick succession but managed to poke home in the goalmouth scramble that ensued, amid the traffic in the box in the 55th minute.

Having drawn first blood, the Bucs went on to the attack and had two good chances to extend the lead but both Lorch and Pule spurned their chances in similar fashion as they went for power over placement with Ratana’s Mbazuvara at their mercy in the Stars goal.

With time running out, Stars presses on, looking to bring some level of joy to the home fans with a consolation goal but it was not to be as the Buccaneers saw them off with the win and secured passage to the group stages of the Champions League.