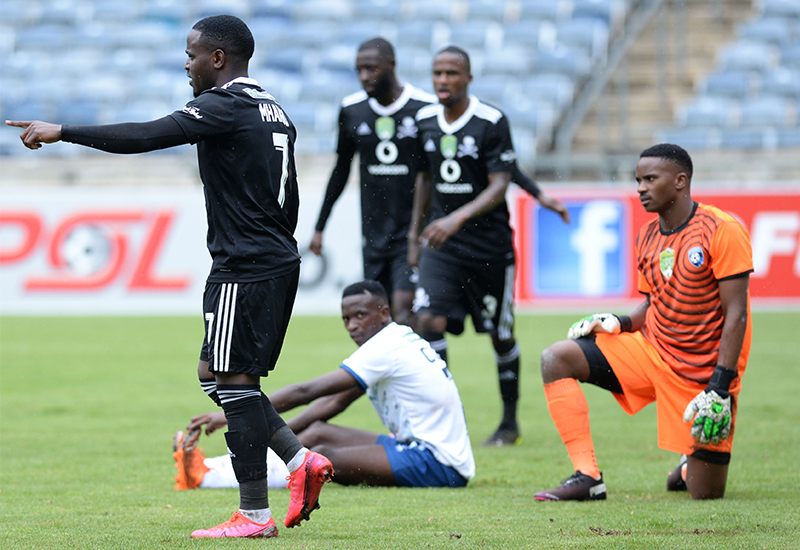 Orlando Pirates secured their spot in the Last 16 of the Nedbank Cup with a narrow victory over Uthongathi at Orlando Stadium on Saturday.

A solitary goal was all it took for the Buccaneers to book their spot into the next round after the First Division outfit put on a decent fight against the Soweto Giants for most of the contest.

Looking to get off to a good start, the hosts met a brick wall, as ten minutes quickly turned into twenty without much in terms of goalmouth action from either end. Deon Hotto's unsuccessful attempt from a set-piece situation in the 19th minute the only exception in this period, with the 30-year-old forcing a save from the keeper with a low shot.

Siphesihle Ndlovu set up Ben Motshwari in the 26th minute, but there was no change to the scoreline, as the midfielder's shot just sailed wide of the target.

A rather subdued first half ended without a change to the scorecard, despite the hosts' dominant display.

The Buccaneers continued to toil early in the second half, and were eventually rewarded when Hotto laid a ball into Gabadinho Mhango's path, and the Malawian international made no mistake in directing the ball past the keeper into the back of the net in the 64th minute.

Innocent Maela almost got his name on the scoresheet in the 82nd minute, as his glancing header from a Kabelo Dlamini cross just went wide of the target.

Next to get an opportunity was Jean-Marc Mundele, who met a cross from Dlamini, but was let down by his first touch as his connection directed the ball away from the back of the net.

The sole strike from Mhango proved to be all that was needed in the end, as the 1-0 scoreline sent the Buccaneers through to the next round.