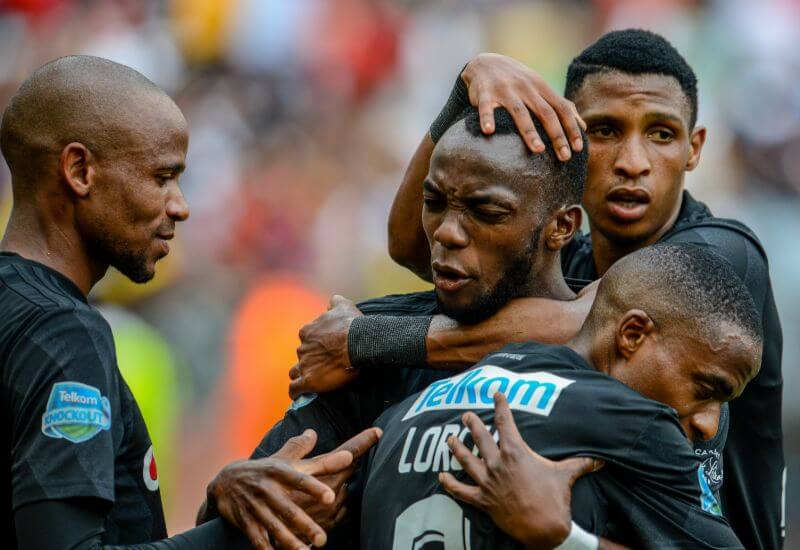 Orlando Pirates fought off a late surge to book their place in the final of the 2018 Telkom Knockout Cup with a hard fought 2-1 win over rivals Kaizer Chiefs at the Moses Mabhida Stadium on Saturday afternoon.

Pirates took the lead with a Thembinkosi Lorch goal in the 13th minute but Amakhosi levelled through Leonardo Castro five minutes later. The Buccaneers would however find the winner courtesy of a goal by Justin Shonga strike in the 83rd minute.

Chiefs had the first sight of goal in the eighth minute, with Dumisani Zuma’s goal-bound chip turned away in unconvincing fashion by goalkeeper Jackson Mabokgwane.

Pirates then turned on the style to claim the lead on 13 minutes. Mabokgwane’s long clearance was missed by Mario Booysen, allowing Vincent Pule to sprint free down the right flank – he in turn played a superb low cross with the outside of his left foot which was turned home by Lorch.

The Buccaneers’ lead lasted only five minutes: a long pass into the penalty area was poorly dealt with by the defence, allowing Castro to poke the ball past Mabokgwane.

The score remained unchanged as the teams went into the break with one goal apiece.

The second half started much in the same vein as the first, with Chiefs opting to sit back and allow the Buccaneers to have all the possession. It was no surprise when the Men in Black were the first to threaten.

Ten minutes into the second half Xola Mlambo fired a shot in anger on the edge of the box and it struck the crossbar.

It was Pirates again in the 60th minute, this time Pule danced his way into the Chiefs box, however his cross was a tad bit high for Shonga to pounce.

The Zambian international wouldn’t be denied however in the 84th minute. A sustained attack ended with Augustine Mulenga crossing for Shonga, whose initial acrobatic attempt saw the ball smothered under his own feet but he recovered quickly, slipped past a challenge from Ramahlwe Mphahlele and found the back of the net – sending the Moses Mabhida crowd into raptures.

Chiefs threw everything but the kitchen sink at the Buccaneers as they sought to find that all-important equaliser and they almost did in the 90th minute. That man again – Castro, out-jumped the Pirates defence but his header narrowly went over the bar.

Then moments later the Amakhosi would come even closer to scoring. Literally with the last action of the game. Mabokgwane pulled off a miraculous goal-line save to deny a close-range header from Booysen.

The referee on the day blew the final whistle shortly after that action to send Pirates to the final of the TKO.

With this victory, the Mighty Buccaneers see their unbeaten run over their Soweto rivals stretch to eleven games; including three consecutive “W’s” in a calendar year.