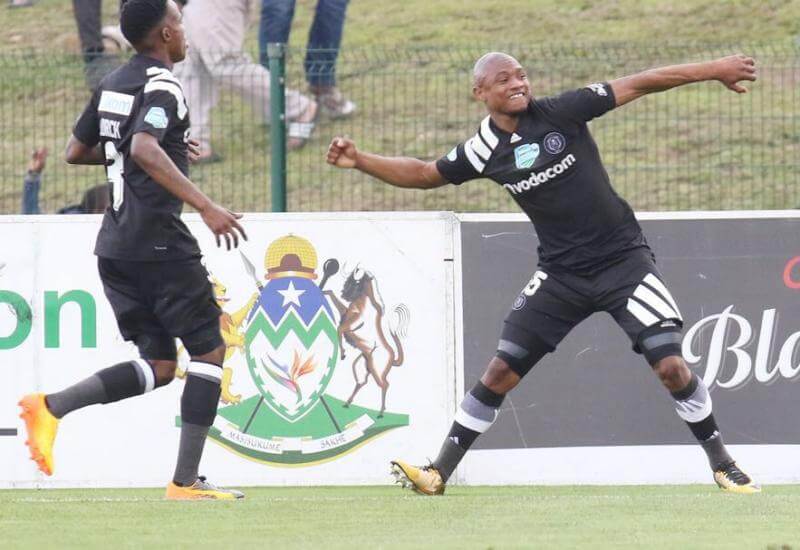 Orlando Pirates are through to the quarterfinals of the Telkom Knockout following their 1-0 victory over Golden Arrows at the Princes Magogo Stadium on Saturday afternoon.

Thabo Qalinge produced yet another Man of the Match performance and he capped it off with a goal in the 35th minute.

AbafanaBes’thendebegan the match with great confidence, but it was Pirates who created the early chances, with Justin Shonga denied by NkosingiphileGumede from close range in the 11thminute, followed by a glancing header onto the post from Thabo Qalinge five minutes later.

The home side’s best chance of the first half arrived on the 30-minute mark when ZolaniNkombelo provided a teasing cross from the left which was touched just wide by striker Lerato Lamola.

Pirates broke the deadlock on the 35th minute, with Qalinge running onto a flick-on from Lorch before lobbing the on-rushing Gumede to find the back of the net and make it 1-0.

Qalinge continued his magic early in the second half and on 51 minutes he burst through the Arrows defence, only to be denied at the last second by a crucial intervention from Nkombelo.

AbafanaBes’thende blew a great chance to equalise in the 67thminute, with Knox Mutizwa left unmarked to have a free header from a corner kick, but the Zimbabwean put his effort over the target.

On 82 minutes the Durban side created another great chance when a flick-on put SipheleleMagubane in on goal, but the attacking midfielder saw his powerful effort turned away by goalkeeper Jackson Mabokgwane.

That chance signalled the start of a siege on Pirates’ goal in the dying stages, but try as they might, Golden Arrows couldn’t break down Pirates’ resolute defence.