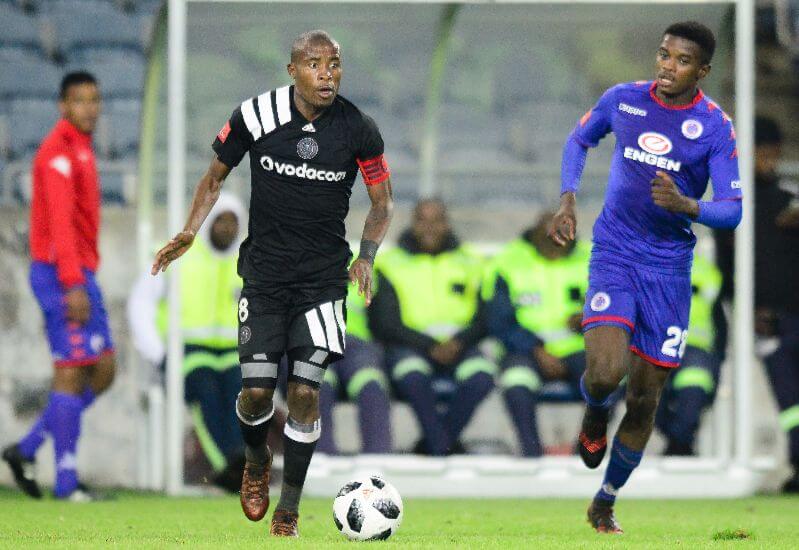 Orlando Pirates and SuperSport United played out to a goalless draw in an Absa Premiership encounter played at the Orlando Stadium on Tuesday evening.

The result sees the Buccaneers drop to third place albeit on goal difference, with Mamelodi Sundowns and Baroka FC occupying positions one and two respectively.

Despite being the visiting team, United dominated proceedings in the first half with Pirates hanging on however, the first genuine attempt at goal came from Thamsanqa Gabuza, who shot wide of the near post following a set piece in the 9th minute.

Two minutes later United should have claimed the lead, with Jackson Mabokgwane unable to claim a cross which saw the ball fall at the feet of Jeremy Brockie, but the New Zealander blasted his shot over the crossbar from close range.

That incident set the tone for the rest of the first half, with Matsatsantsa dominant but unable to hit the back of the net. Brockie struck the woodwork in the 38th minute with an effort from a tight angle, with the rebound by Dean Furman missing the target.

The best chance of the first half came just a couple of minutes before the break, as a poor defensive header from Gladwin Shitolo gave Clayton Daniels a glaring chance right in front of goal, but the United man somehow put his effort over the bar from a few metres out.

Pirates made a tactical switch early in the second half by withdrawing Riyaad Norodien and putting on Thabiso Kutumela, and the striker nearly broke the deadlock with a shot which flashed just wide in the 62nd minute.

With 15 minutes to play Bucs missed out on another great chance, as a poor goal kick from United keeper Reyaad Pieterse handed Mpho Makola a sight of goal, but the midfielder dragged his low shot wide as well.

The final chance of the game went the way of former Pirates attacking midfielder Sifiso Myeni, who volleyed a dropping ball on the edge of the box and sent a low effort wide of the target in the 89th minute.