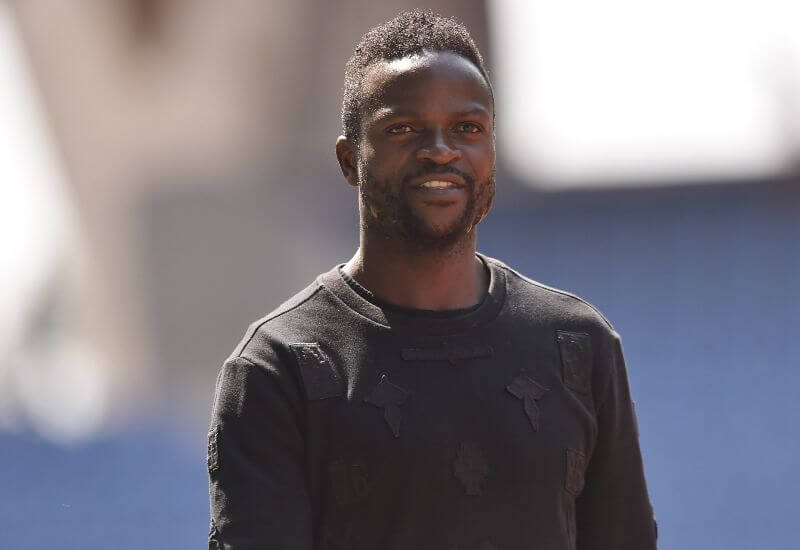 The word has spread far across Zambia that the Buccaneers are in town. The training sessions have garnered quite a following among the locals, particularly the youngsters who started with a watchful eye from a distance, to attending training and cheering on the players from the stands.

While the boys have been a welcomed intrusion - especially since their presence enhances the spirit of goodwill that the Club have received in Ndola - no visit has been more welcomed than that of Isaac Chansa.

To the uninitiated, Chansa is just a former Bucs midfielder, but seeing him at training lifted the mood and invoked emotional memories of that famous Saturday afternoon at Orlando Stadium when his right foot fired the Bucs to the league title with only minutes left of what would be the first of back-to-back treble winning seasons.

Dressed in black, Chansa spoke to Orlandopiratesfc.com about his visit to a stadium and Club with which he is very familiar and particularly close to.

“I heard that the team was coming to Zambia for pre-season and when it was confirmed that they’d be in Ndola, I just had to come over and say hello. I live in Lusaka - which is 316 km away - but distance was not a factor in getting to greet the team. An important part of my life was spent at Pirates and as the saying goes: ‘once a Pirate, always a Pirate’. I will always be a Buccaneer.”

Beyond the nostalgia created by seeing the team and coaching staff, what was more important to Chansa was seeing he relationship between Orlando Pirates and Zambian football continue to flourish.

“It feels great and it’s also an honour seeing the continued relationship. From the days of Denis Lota and now with my boys, Justin Shonga and Augustine Mulenga, the relationship continues to grow. I have been talking to them, Shonga and Mulenga, and encouraging them to continue working hard and contribute to the team. But overall its great for me to see the team and being welcomed like this shows that I’m still part of the family, even though many of the people I knew have since left.”

THE NEW GENERATION OF ZAMBIAN BUCCANEERS

“A lot of Zambians support Orlando Pirates. Since the time of Denis Lota who did very well and was a top goalscorer, to my contribution in the treble... they have been behind this team and continue to be. It has been a long time since I last wore a Pirates shirt but to this day, people still call me “Bhakaniya” even though I’ve played for other clubs here in Zambia. They remember what I did, and that’s special.”

“To see the next generation in Shonga and Mulenga is heartwarming, more so when they are doing well for the Club. I believe in them and I believe in the Club too. I know that they will achieve greatness if they just keep focused and continue working hard on their dream.”

“I would like to think that they chose to be here because they looked at our previous success as Zambian players at Pirates, and also realized that this is a very professionally run Club with massive CAF aspirations. Together, they and the Club are a perfect fit because they want the same things. And hopefully they can inspire the next phase of Zambian stars to continue that legacy that we have with Pirates.”

A WORD OF ADVICE TO THE DUO

“I read an article where Mulenga said that he wanted to emulate me. While that was encouraging, and even flattering, I told them both that they have talents which surpass what I did with the team. I told them to just follow their dreams and remember with everything they’re doing that they are professional footballers. Pirates is a big team and there is nowhere to hide because the platform you get here means that supporters will recognise you everywhere you go. I told them to always give their best and if they stay focused, they will do well because the possibilities are endless for them.”

AND OFCOURSE, ‘THAT’ GOAL

“It was a special time, a magical time, and I think as players we will always be grateful to have served the Club in that way. For me, it’s not so much about the goal, but about our generation as a whole. We did our part to add to the Club’s already rich history and culture of success.”

“When I look at the team now and I see Happy Jele, it feels good knowing that he was part of that team which won the treble with us. The current crop will need his experience.”

(*while the modest Isaac Chansa dances around the subject which lauds his strike, similar to him dancing round the Golden Arrows midfielders on that fateful day, for the Club, it will go down in history as one the greatest).

In parting, Chansa paid tribute to The Ghost, and appealed to them ahead of what will be a testing season. The Buccaneers face the prospect of two additional tournaments in the form of the MTN8 and CAF Champions League.

“We would not have been able to do it (the treble) without our supporters. Pirates supporters are the most passionate and loyal supporters that I have ever come across and they will always be dear to me. I appeal to them to give the same kind of support to this current crop of players.”

“These guys did well last season and obviously everybody is happy and expecting more of the players and the team in the upcoming season. The supporters need to be there to help them like they did with our generation. We will all be watching and supporting them. Even here in Zambia, we will be supporting in spirit.”