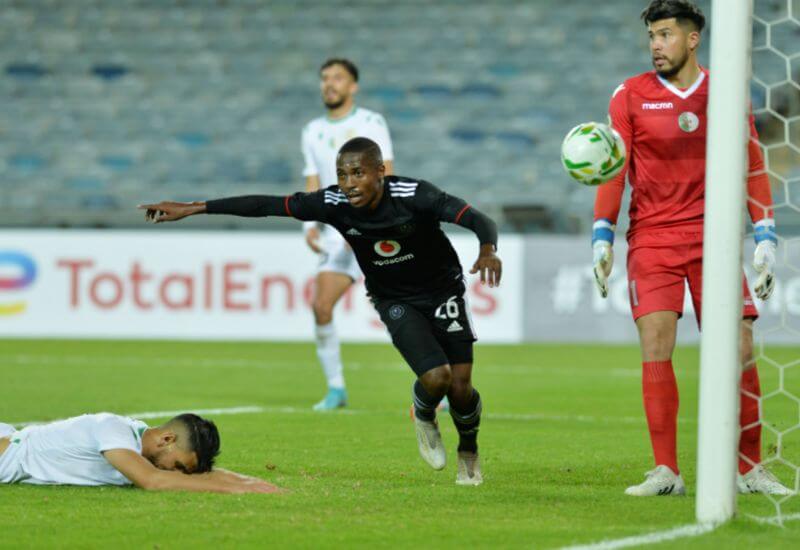 Orlando Pirates got their CAF Confederation Cup group stage campaign to a winning start as they beat JS Saoura of Algeria 2-0 in their opening Group B clash played at Orlando Stadium on Sunday night.

Seven days after the Soweto Giants’ return to the field of play, they were tasked with overcoming the Algerians, who came into the encounter on the back of a five-game unbeaten streak.

The game got off to a flyer as Bucs keeper Siyabonga Mpontshane was called upon 37 seconds after kick-off, and was perfectly-positioned to hang on to a shot from Aimen Lahmri which was struck from close range.

It only took the first set piece of the game for there to be a change on the scoreboard, and it was the hosts who provided the goods through skipper Happy Jele, who popped up at the right place at the right time to collect the rebound after Goodman Mosele had been denied by Saoura keeper Zakaria Saidi. With the keeper taken out of the equation, the 35-year-old defender only had to direct the ball into an empty net, which he did without much trouble to make it 1-0 just three minutes in.

The home side could have grabbed their second two minutes later when Deon Hotto squared the ball across the face of goal for Thembinkosi Lorch, who was a split-second late on the ball and was unable to turn it into the net.

After the dramatic start, things mellowed down towards the middle period of the first half before the visitors started hitting their straps.

Mpontshane displayed superb acrobatic skills in the 16th minute when he flung himself to his left to keep out a powerful volley from the dangerous Belaid Hamidi.

With Saoura aggressively searching for the equaliser, clear-cut chances dried up at the other end with the Buccaneers pinned inside their own half.

This was until the 33rd minute when Lorch’s attempt at connecting with Kwame Peprah was offset by some clever defending, denying the Bucs striker the chance to get a shot at goal from close range.

A set-piece late in the first half almost brought some joy to the Algerians as the ball was floated into the home side’s penalty area, where Mpontshane needed two attempts at grabbing the ball before averting the danger.

It was again another quick start from the visitors, who kicked things off in the second half, demanding some resilience from the Pirates defence.

Like he did early in the first half, Jele found himself in an advanced position in a set-piece situation nine minutes after the restart, but his flick towards goal missed the target this time around.

Saoura, however, continued to enjoy some territorial dominance, but without affecting the scoreline.

The next goal came against the run of play with the Buccaneers employing a quick counter before Hotto sent the ball across the face of goal into the path of Shandu, who doubled the lead in the 66th minute.

With their two-goal cushion, game management was required from the hosts, who looked to keep the Algerian inside their own half.

Saoura did break away from Pirates’ grasp as they launched another attack in the 72nd minute, which ended with an ambitious shot from Hamidi, who was nowhere near the target after going for goal from a good distance out.

The introduction of Kabelo Dlamini and Zakhele Lepasa ten minutes from the final whistle almost yielded immediate results, with the duo combining well down the middle only for the latter to be beaten to the ball by Saidi.

The day belonged to the hosts in the end, as they overcame some nervy moments throughout the 90 minutes to walk off with all three points on offer.