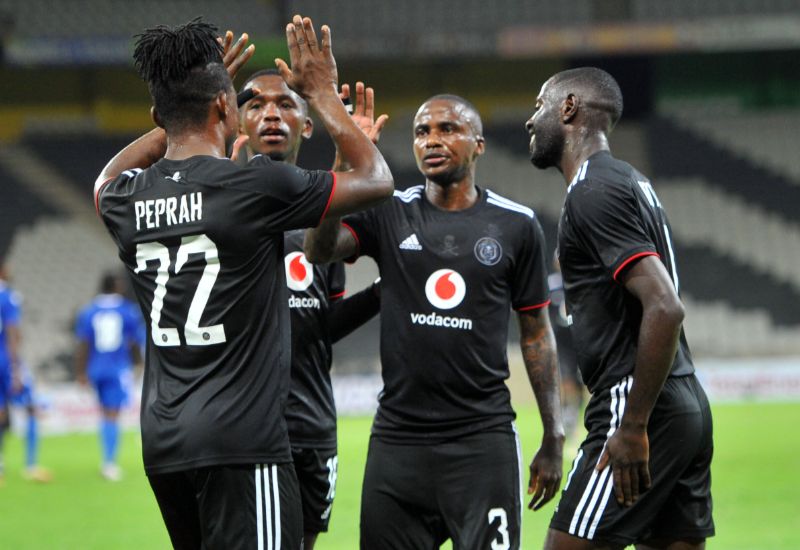 Orlando Pirates came from two-goals down to claim a convincing 6-2 win against reigning Eswatini champions Royal Leopards in their CAF Confederation Cup clash at Mbombela Stadium on Sunday night.

The result of the earlier Group B fixture had effected some change in the standings, with the Buccaneers slipping to third after Al-Ittihad and JS Saoura had collected a point apiece in the parallel encounter. This meant that the Soweto Giants needed to maximise their returns against the Swazi outfit, who were desperate for a maximum points haul after beginning their campaign on a losing note.

A disastrous start however greeted the visitors, with the home side grabbing two unanswered goals inside the opening ten minutes.

Mzwandile Mabelesa was the first to get his name on the scoresheet just five minutes into the clash, as he netted in from a tight angle with a deflection from Happy Jele helping the ball beyond goalkeeper Siyabonga Mpontshane.

The lead was doubled two minutes later as Thabiso Mokenkoane found a way to breach the Bucs defence, setting up an uphill climb for the visitors early on.

Desperate to claw their way back, a clinical effort was required from the Soweto Giants, and they provided just that, beginning in the 20th minute when Kabelo Dlamini forced an error from his namesake Machawe Dlamini, who deflected a cross from the Pirates midfielder into his own net.

The Buccaneers’ search for the equaliser was not a long one as they drew level just 38 minutes in when Bandile Shandu continued his impressive goal-scoring form after running into a perfectly-threaded pass from Deon Hotto.

Hotto would again be instrumental in another crucial moment for Pirates as he chipped one into the direction of striker Kwame Peprah right on the stroke of half-time to send the visitors into the break 3-2 up.

Ominous signs welcomed the home side back onto the field early in the second half, with the visitors forging ahead largely untroubled as they controlled possession after the restart.

Their dominance would show up on the scoreboard 12 minutes after emerging from the tunnel as Jele grabbed his third of the competition with a glancing header that took Pirates’ lead to two goals.

The wait for the seventh goal of the evening was not long, and Kabelo Dlamini was the man to provide the goods as he showed some good touches inside the box to make it 5-2 on the hour mark.

With more than a healthy lead heading into the final half-hour, the visitors made four of their allotted five changes for the encounter.

One of those was the introduction of Terrence Dzvukamanja, who made his presence count in the 80th minute when he benefited from a fine pass from Peprah to make it six goals on the night for the Buccaneers.

With no way back into the contest for the home side, Pirates controlled matters and ended up as comfortable winners to reclaim their spot at the top of the Group B standings.