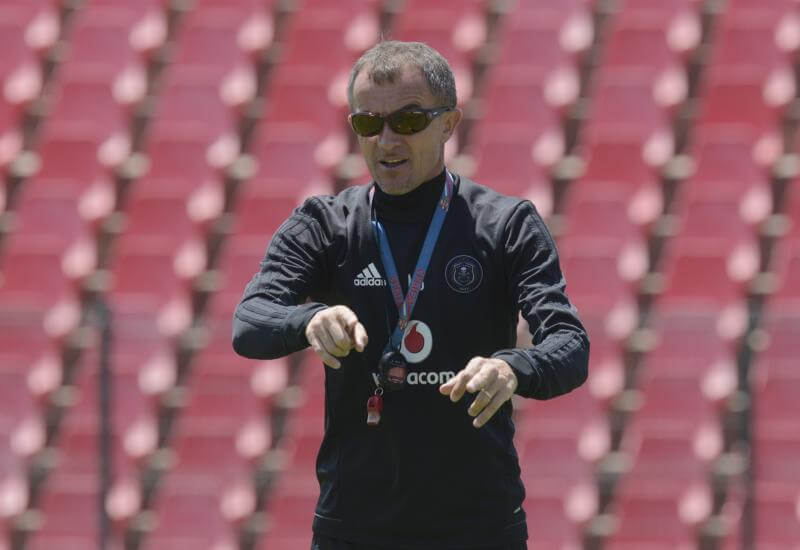 We must build momentum – Micho

Micho as the coach is affectionately known, has his eyes set on the upcoming Telkom Knockout Cup clash against Golden Arrows over the weekend. This will be the Bucs head coach’s first cup match since re-joining the Buccaneers after a 10-year hiatus.

Orlandopiratesfc.com had the opportunity to sit down with the 48-year old to discuss his recent experience of the derby as well as the TKO match on Saturday.

On Soweto Derby as a Spectacle

The tension and pressure surrounding this match is unrivalled. I have been lucky enough to coach for many big derbies in Africa, like in Sudan, Ethiopia, Uganda and Tanzania.

Obviously, having this background as experience, it helped me settle better. But to say that a person can get used to the derby and the tension that comes with it would be inaccurate. One can never get used to the Soweto Derby and I say this as someone who has been to about 138 countries all over the World.

Personally, I believe the Soweto Derby is in the Top 3 Derbies in the Southern Hemisphere alongside with the derbies in Argentina and Brazil.

To be honest I'm addicted to such games, I prefer to play in front of 70 000 people rather than a few hundreds of course.

We (coaches) want to give double joy to our supporters; this means good football and positive results. Sometimes teams win but don't play a good brand of football and that is also frustrating for the fans. On the other hand, sometimes you play really well but don't win.

We are in the process of building and for that reason I can say that we (the technical team) were generally pleased with the performance of the team last week. Having said that, I also fully understand the expectations of our supporters.

No coach joins this club blind of those expectations; this is why we are not ready to rest. We are working around the clock and it’s only a matter of time before we get our systems in place. The supporters must understand that it is a process. We will get it right.

We are pushing all departments to play with the brand of football that will excite supporters and make them happy. We are building a house here, and it starts with foundations before putting a roof on it. The habit of scoring has to be done through repetitions, and that's our aim as a technical team.

On TKO last 16 vs Arrows

It is obvious that in matches like a derby, all players are focused and alert. It will be our job to ensure that the players are equally focused for the match against Golden Arrows.

With this type of match, there is no correction like you would have in the league. A cup game doesn’t cater for draws, there has to be a winner and a loser therefore coming into this match will need us to be firing on all cylinders.

At the end of Saturday, we will either be in the last 8 or we won't. We have to have the same brand of football and the same level of commitment as we have shown in the derby.

We have ambitions to win this cup, but this is a sentiment shared by 15 other coaches in the league. It’s for us to show that we want it more than the next team and we do this by treating each match as the most important match in our calendar.

When you are wearing the Orlando Pirates jersey, the expectations are at the highest. Yes, we are in a transition period and in a building process after last year's disastrous season, but we shall always give our best and not give up.

All that we do though has to be done properly, without putting too much pressure on the players so that they are at their best to perform, to be able to express themselves and enjoy the game.