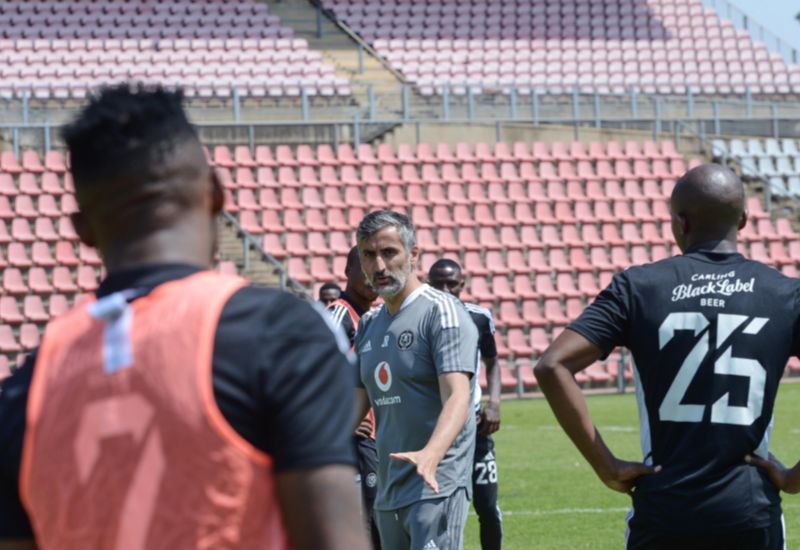 A busy October continues for Orlando Pirates travel to Peter Mokaba Stadium for a DStv Premiership fixture against Sekhukhune United on Tuesday.

It’s a return to league football for the Soweto Giants, who were in action over the weekend in an MTN 8 semifinal clash at home to Mamelodi Sundowns, and will come up against a side that last took to the field midway through September.

Things finished goalless at Orlando Stadium on Saturday, with the two sides set to battle it out once more in the second leg of the tie in Polokwane later this month.

The result was their second game unbeaten, with defeat away to Maritzburg remaining the only blip in their record over their last seven games in all competitions, where they have won four and drawn two.

The main focus for the Buccaneers - who occupy second place on the standings - will be to narrow the gap between themselves and log leaders Sundowns, who are five points clear at the top of the standings.

For the hosts, it’s a far more desperate situation as they find themselves in 15th place after managing a single victory in their eight league outings.

Sekhukhune are winless in their last six matches, with just three points collected during this period, where they have suffered three defeats and drawn as many games.

In total, Babina Noko have managed just seven points in the league and will be eager to register a win, which could take them as high as 10th place.

The hosts will be without defender Tresor Yamba, who is serving a two-match suspension after being red-carded during the one-all draw against Stellenbosch in his side’s last outing.

They will however be welcoming one of their stars back from serving a ban, with attacking midfielder Pogiso Mahlangu eligible for selection after sitting out the last two matches due to a red-card suspension of his own.

There’s also doubts over central midfield player Sammy Seabi, who did not feature against Stellenbosch after pulling out injured in the previous fixture against Cape Town City.

With just two days of rest between fixtures, Pirates could make a number of changes to their matchday squad, and the likes of Thabiso Monyane and Vincent Pule will be eyeing a starting berth after coming on from the bench on their return from injury.

An accumulation of yellow cards means that defender Olisa Ndah will miss the clash, with Tapelo Xoki likely to start in his place.

Zakhele Lepasa (Orlando Pirates): A confident striker is crucial to any team’s cause, and Lepasa has displayed plenty of that in the last few weeks. Fresh from a national call-up, the 25-year-old possesses mobility that can trouble any defence, and is an expert at making those threatening runs that can place him in goal-scoring positions.

Linda Mntambo (Sekhukhune United): Intimate knowledge of the opposition can prove crucial to a team’s tactics, and the Sekhukhune skipper can provide plenty of that, having spent four seasons donning the famous black and white. Mntambo’s value however stretches beyond what he can contribute in team discussions, and his creative presence in the midfield can create problems for the Buccaneers on the day.

Pirates will be heading into their clash looking to maintain their 100% record against Sekhukhune, who they have only met twice previously.

The Buccaneers posted a come-from-behind win last season at Orlando Stadium, with Linda Mntambo and Kabelo Dlamini finding the net.

The next encounter between the two sides ended in a 1-0 win for the Soweto Giants, courtesy of a late strike from Fortune Makaringe.

The game kicks off at 17:00 and will be broadcast live on SuperSport PSL. Tickets for the clash are available for purchase at Computicket outlets.

You can also follow the action by keeping an eye on live updates provided on Orlando Pirates social media platforms.