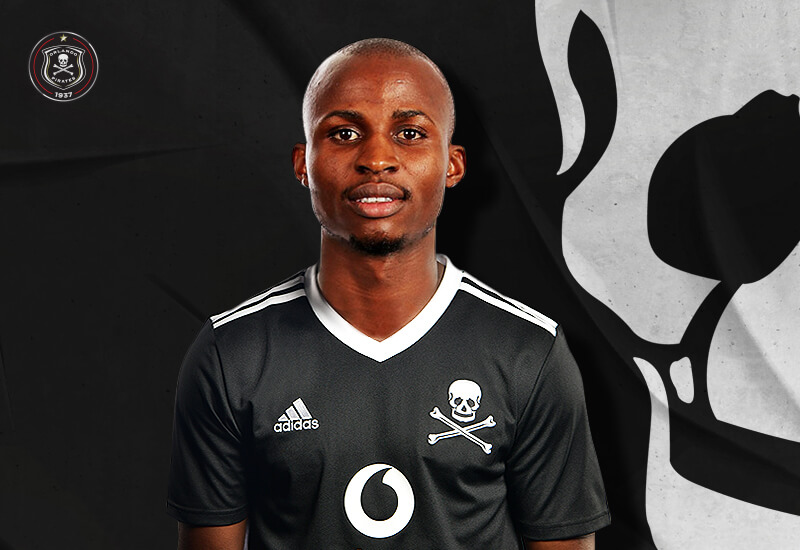 Innocent Chikoya, Tendai Ndoro, Edelbert Dinha and Gilbert Mushangazikhe are Zimbabwean players who once donned the Orlando Pirates jersey and went on to become household names in South Africa.

Terrence Dzvukamanja, who was unveiled to the Ghost last week, has set his sights on emulating his fellow countrymen.

In his first interview as a Buccaneer, the 26-year old attacker reveals what he believes it will take for him to succeed at his new club.

Terrence, the deal is done! Welcome to Orlando Pirates.

Hi, thank you for the welcome. It feels good to be here.

Now before we continue with the interview. How exactly do we pronounce your surname correctly?

My surname has surprisingly been pronounced correctly. Its Dvzukamanja which sounds like “ju-ka-man-ja”

You have been in South Africa since 2018, how did your move to Mzansi come about?

My move to South Africa came about when Wits sent its scouts to come and see me in Zimbabwe when I was playing for Ngezi Platinum. In that year I had a good start to the season and I guess this is why Wits sent people to watch me play.

All in all, I would like to thank Wits for the opportunity that they provided me and I will forever be grateful to them for this.

During the bubble your former coach at Wits was full of praise for your performance against Sundowns (in the Nedbank Cup). He further expressed his surprise at the time that neither of the big clubs had come knocking for your services but now that you are here, how does it feel?

Yah I feel good about that. When a big coach like Gavin Hunt praises you that means you are doing something good. For me I always aim to do my best…. unfortunately Sundowns were just a little bit better than us on that day.

But overall in terms of the overall acknowledgement and recognition I am happy because this all means that people have seen something in me.

Talking about the big clubs, what is it with you and raising your game for the big matches? Do you apply a different mentality when you play the likes of Pirates, Chiefs and Sundowns?

Its not like there is a switch that I turn on and off depending on the team I play against. No, its not like that. I use the same mentality for all games but maybe the difference between the so called big and so-called small teams comes from the way the teams set up in terms of structure tactically. When you play some teams in the league most of the so-called small teams play man to man marking. There is no space there; the defender follows you everywhere on the pitch.

But again, I would like to emphasise that I don’t change my approach based on the profile of team that I’m playing against.

Have you set yourselves any personal goals yet?

Yah of course. This is what drives all players to better themselves day by day. For me its two-fold, it’s about scoring goals – hopefully double digits and also about increasing my number of assists for the season. I think as an attacking player these are two areas that a player is judged.

I don’t want to see myself as somebody who came to Orlando Pirates just to add numbers. I have come here to work, and this is what I hope shows in my performances. I want to make a difference here and if all goes well, hopefully I can achieve another goal of mine which is to one day play in Europe.

You have shown in the past your versatility. What is your favourite position?

I like the number 10 position but as an attacker you can’t say this is my favourite position and that’s it. You must be able to play anywhere and everywhere the coaches want me to play but if I had to choose then it would be that old school number 10 position behind the striker.

Have you met your new teammates yet? We sure seeing familiar faces has made the transition easier for you.

I got a good reception from my teammates. Some are familiar faces of course because of our time from Wits.

Lastly, any messages for the Ghost?

Hi Ghost, this is Terrence Dzvukamanja. I have come here to serve and honour this badge. I promise to give 110% effort every time, be it in training and in matches. Once a Pirate always a Pirate!