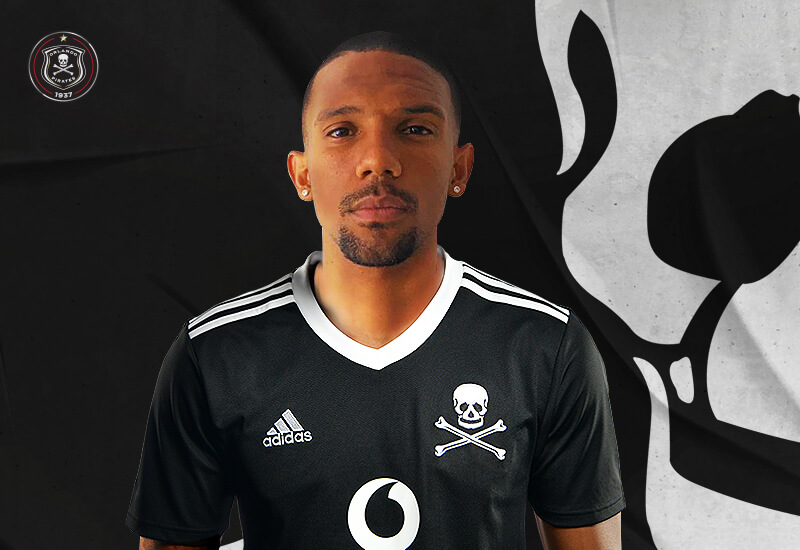 Dreams do come true. This has indeed been the case for new signing Wayde Jooste who has spoken of his ambitions of playing in the Black and White. This is after all, a club he has supported since he was little boy.

We sat down with the 29-year-old today for his first exclusive interview as a Buccaneer.

Hi Wayde. Welcome to Orlando Pirates. How does it feel to be a Buccaneer?

It feels amazing. To know that I’m representing one of the biggest clubs on the continent never mind in the country. For me its an honour and a privilege to be representing a club as big as Pirates. So yah, I’m really excited for the challenge that lies ahead.

What was the activity on your phone and social media accounts like when the club announced your signing?

The response on my social media accounts was something else. Every time I opened one of my accounts, it would go crazy with likes and comments. My followers have been going up daily. It was unreal.

For those who don’t know much about you, can you share with us a little bit about yourself and how you became a professional player?

I come from a sporting background where my father was a footballer and his father, my grandfather was a rugby player. So I think I was always destined to play sports, not knowing that one day I would have the opportunity to play with one of the biggest clubs on the continent.

When I was about 18 years old I was spotted at the Bayhill Cup tournament by Eric Tinkler then I went to the Wits Academy - I was there for two years. From there I went to Bloemfontein Celtic where I played for the reserve team for a season then I was promoted to the first team. From there I went to Golden Arrows and then Highlands Park. Now I am here at one of the biggest clubs on the continent.

You are someone who seems comfortable both in attack and in defence. Have you always been a wing back or did you transition into this position over the years?

No actually I wasn’t a wing back. I actually started off as a striker in my junior days. I used to always finish as the top goal scorer like every season…I wouldn’t say bored, but I wanted more of the ball so I decided to move to wing.

The transition to wing back wasn’t much of a big thing for me because the qualities are similar in the demand that both positions require.

One can never be fully satisfied with their game, I am not different. There are areas I feel I can improve and this – amongst other things, is what I work on from time to time.

Are there any players you looked up to growing up and as a follow up to this question? Is there a player which you model your football around?

Growing up I always used to watch David Beckham, I used to like how he crosses the ball and how he takes free kicks. I always liked to be like him. As time went on then came Cristiano Ronaldo. In terms of molding my game, I wouldn’t say theres a particular individual but what I often do is watch a lot of games and then I look at areas where they are good and things that I can adapt into my own game.

It’s an ever-evolving process. One can never be satisfied, you always need to push yourself hence why I am always looking at other players from different leagues.

How much are you looking forward to the challenge of playing for a club with so much attention and the pressure that comes with it?

I am very excited by the challenge because I know a lot of people associate Orlando Pirates with winning titles. I am not here to just add numbers. I also want to win things, I want trophies. I have never won a trophy … the closest I have come to a trophy is playing in a final but that is not enough for me.
Coming to Pirates, I want to leave a positive mark and the best way to do that in a team like this is through success in the field of play.

You have already met up with your new teammates. How was it and have you settled in yet?

Its been good. I’ve settled in nicely. I know most of the guys from playing against them in the past. Others I know as teammates, so it hasn’t been difficult to settle in.  Everybody has been accommodating… I am fitting in well like a glove.

You have scored seven goals in your career so far in your career. Can you remember the last goal you scored and who it was against? And which goal is your favourite to date?

[Laughs] The last goal I scored was against Orlando Pirates, here at Orlando Stadium when I was playing for Highlands Park and in terms of my favourite goal [laughs again], again it was against Pirates when I was playing for Golden Arrows. It was a free kick. I think at the time we were losing 1-0, I stepped up and the rest is history, but we ended up losing the match 2-1.

They say consistency breeds success. Do you do extra work outside of the usual football training?

That is what I pride myself on. Whether its extra training in the gym or at training, I always like to push myself because I know just doing the bare minimum will never be enough.

I am somebody who believes you can always improve something. I will continue to do that until I hang up my boots – I won’t change.

What are your immediate and long-term ambitions both at a personal and team level?

My immediate ambitions for the club, is to secure a regular berth in the team but most importantly is for the team to gel well early on so that we can build momentum.

First things first is the team and its ambitions and then personal ambitions follow. I would like to represent my country one day, but like I said, it starts with the team ambition first and then mine can follow later.

Lastly, any message to the Ghost?

My message to the ghost would be, please continue supporting us. Do not stop the faith and the love you have for the team. We will work hard to make you proud. 2020 is a new chapter and I believe big things are coming.