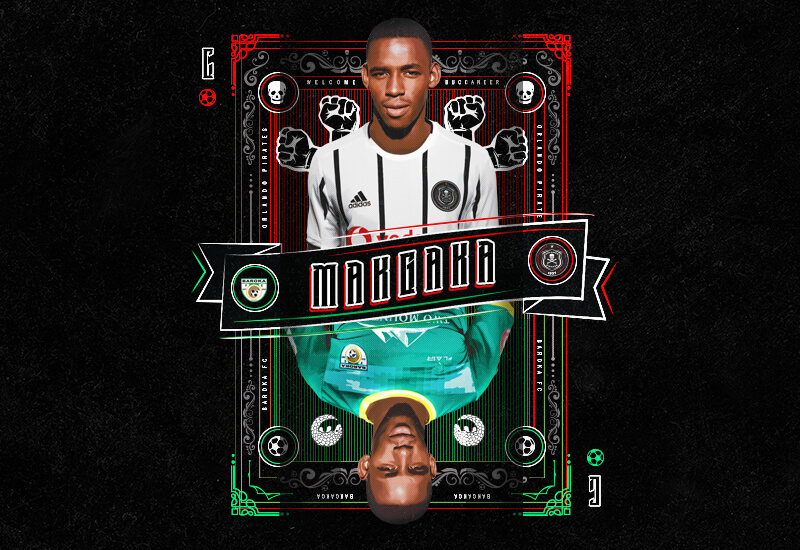 New signing Collins Makgaka has labelled his journey to Orlando Pirates as a dream come true and says he can’t wait to get started at his new club.
The 24-year old sat down with Orlandopiratesfc.com for his first interview to discuss his switch from Polokwane to Gauteng.

Collins, Welcome to Orlando Pirates. How does it feel to be embarking on this next stage of your playing career?

Thank you very much. What I would like to say is thank you to all those who made this move possible. I would also like to thank Orlando Pirates for welcoming me with open arms. I am looking forward for my debut match in the Pirates kit.

A little is known about you. For those who do not know you, who is Collins Makgaka?

Collins Makgaka is a boy from Marblehall by Groblersdal in a rural place called Moganyaka. I started playing football in the streets and then my first venture into professional football was when I joined Baroka FC in 2016 I think, in the NFD where we got promoted in the first season.

Two years later I won my first trophy when we won the Telkom Knockout and now I am here at Orlando Pirates in 2020. All I can say is that its an honour and privilege to be here.

Your signing has caught many people by surprise. What would you say are your best attributes as a player?

I’d say I’m a naturally attack minded player. I can play anywhere in the attacking positions. I would say my best attribute is dribbling 1v1 situations and I can create scoring opportunities for my teammates in the final third.

There’s clearly a lot of competition for places here. Will you relish pushing the guys for a place in the squad?

Yah, there’s obviously a lot of competition for places. Everyone wants to play and there’s only 11 spots on the field. Its up to all players to push and work hard. Iron sharpens iron so the harder the group works, the better all players end up becoming over time.

What’s your favourite position and what can the Ghost expect from you?

My favourite position is number 10. But funny enough, I’ve never had the opportunity to play there since becoming professional. For now I’ve played on the left and the right side of attack but not yet number 10 but like I said earlier, I don’t mind playing anywhere in attack and as for what the supporters can expect from me, all I can say is that I promise to give my all and grab this opportunity with both hands.

A lot of people helped you along the way to be where you are as a footballer but who would you say has been the most instrumental?

A lot of people have helped me. Not only one person. I am here today because of the many hands that worked with me. One such example is my teacher, Mr Disolwane who was also my soccer coach. He is the one who took me to Baroka for trials. He organised me an opportunity to trial there after he had asked the officials to look at me. The rest is history.

What was it like to meet up with your new teammates and coaches for the first time? And how has training been so far?

Eish, I was nervous. Like really nervous. The thought of meeting my new coaches and new teammates was daunting. I kept playing out different scenarios in my head on how the first day would go [Laughs].

My meeting went very well. The guys were very accommodating, they welcomed me with open arms.

As for the training, it was a bit tough obviously this is understandable because I haven’t been playing for a while now but I’m already working hard to catch up on the lost time in order to get back to where I used to be fitness wise.

Prior to moving to Pirates, you have spent your entire professional career in Polokwane. What have you heard (if anything) about the pressures that come with playing in Gauteng?

I’ve spent all my career as a footballer in Polokwane. In Polokwane life is simple, it’s not busy. Life is pretty much laid back.

As for coming here to Gauteng, what I have heard and what I keep on hearing is about the pressures of Gauteng especially for the big three teams – Pirates, Chiefs and Sundowns.

When I was at Baroka I used to speak to players who had come from Gauteng and they used to say that when playing for these big clubs, you are expected to perform each and every game and the fans remind you all the time.

As for how I will deal with my move here, all I can say is that I will take it as it comes and focus on what I’ve been brought here to do and that’s to play football.

Thanks for the interview Collins, anything else you’d like to say?

Nothing much for now. I will leave the rest of the talking to my legs in the field of play.