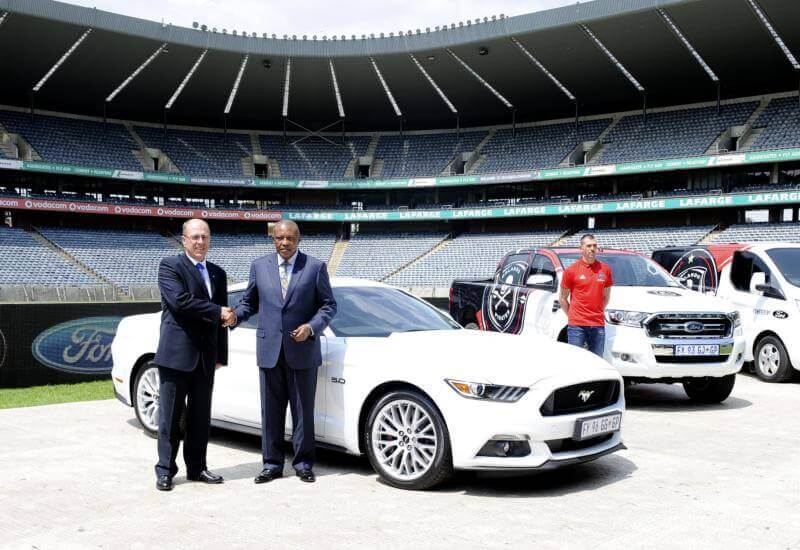 The partnership agreement, which formally kicked off at the Orlando Stadium today, 26 September 2017, encompasses a three-year deal in which Ford will supply Orlando Pirates with vehicles across its impressive portfolio, including the iconic Mustang, Ranger, Everest, Transit and the EcoSport.

Speaking at the launch, the Chairman, Dr Irvin Khoza said: “Orlando Pirates is a brand that is synonymous with excellence and steeped with a rich and proud history. The Ford Motor Company dates back to the beginning of the 20th Century with the production of the Model T, a car that revolutionised the automobile industry and forms the basis for the vehicles we drive today. With a combined history of 189 years, the merging of these two brands, which continue to make a huge impact on society, speaks volumes to the legacy that will be left behind by the journey that we’ll take from today and into the future.”

“For two brands that have stood the test of time, like Ford and Orlando Pirates, innovation is not a choice, innovation is the norm. The association between these two brands is both fitting and opportune. It will help both brands Go Further.”

Meanwhile, Casper Kruger, Managing Director, Ford Motor Company Sub-Saharan Africa region said: “Orlando Pirates is a household name in South Africa with a massive following and a proud heritage, as well as an impressive record in the Premier Soccer League.”

Orlando Pirates, established in 1937 and currently celebrating their 80th anniversary, is one of the most successful and recognised brands on the African continent.

Ford too, has an extremely proud South African heritage, with the local operation established in 1923. It is among the top three vehicle manufacturers in South Africa, with the locally assembled Ford Ranger regularly topping the overall sales charts, and being exported to more than 148 markets around the world. Recent major investments in its Silverton and Port Elizabeth plants enabled Ford to start producing the sophisticated Everest seven-seater sport utility vehicle (SUV) for domestic and export markets too.

Both the trend-setting Ranger and Everest feature prominently in the fleet of vehicles supplied to Orlando Pirates. This is complemented by the muscular, attention-grabbing Ford Mustang – which is South Africa’s top-selling sports car – as well as the segment-leading Ford EcoSport compact SUV.

The compact Transit Connect and its larger sibling, the Transit Custom, will capably fulfil the club’s load-lugging roles for all its gear. Both vans have proven commercial vehicle credentials, including International Van of the Year titles in 2014 and 2013, respectively.