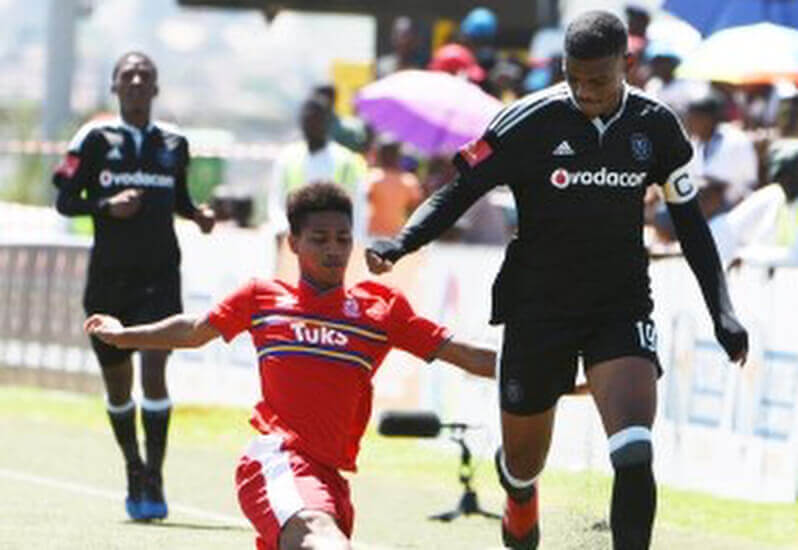 The Orlando Pirates u17s will lock horns with defending champions Atletico Madrid in a must-win clash at the Nike Centre in Soweto this afternoon.

With two matches played already so far; Philani Kubheka and his team know that nothing less than a victory will be enough, if Orlando Pirates are to contest for the coveted Future Champs trophy. Pirates have one loss and one victory under their belt while the Spanish giants have registered a draw and a win. Victory for the Buccaneers will see them top the group and qualify for the semifinals of the tournament while a draw or defeat will see the Club contest in the 5th-8th place playoffs.

Kick-off for this all-important clash is scheduled for 14:30. The match will also be televised live on SuperSport.

Orlando Pirates went down 2-1 to FC Brugge of Belgium in the opening match of the Future Champions on Monday afternoon.

The young Buccaneers conceded a goal as early as the 4th minute when the defence was caught napping in the box and allowed Simon Paulet to open the scoring with a back heel in front of goal.

Not to be outdone by their overseas counterparts, Pirates took the game to the opposition in search of an equaliser and almost found it midway through the first half after Thabiso Monyane intercepted a pass from Club Brugge’s goalkeeper, however his attempt to dribble his way around the keeper was thwarted by the Brugge defence who cleared the goal bound ball to safety.

With time running out in the first half, Pirates finally found the net through the boot of captain Lyle Foster who calmly chipped the ball over the onrushing keeper to level matters.

The second half kicked off and it was Club Brugge who dominated proceedings throughout the half and they were duly rewarded for their efforts with a second half strike by Shala Visa.

Following their disappointing loss to Club Brugge, Orlando Pirates knew that they needed to bounce back and bounce back they did when they faced University of Pretoria at the Nike Centre on Tuesday.

A brace from the captain, Lyle Foster and goals from Simo Bophela and Bonisile Mbanagwa saw Bucs register a comfortable and much needed 4-0 victory.

It took only 13 minutes for the young Buccaneers to open the scoring after Amatuks goalkeeper, Patel Taureeq parried Thabiso Monyane’s attempt at goal towards a diving Mbanagwa.

Lyle Foster increased his tally to two goals in tournament when he scored a similar goal to the first game by chipping over a helpless goalkeeper who was caught in no man’s land after leaving his line to try and clear the ball on the edge of the box.

It was on way traffic in the second half with Pirates piling up the pressure in search of more goals.

The pressure paid off when Bophela’s thunderous shot from meters outside the box gave a sigh of relief to coach, Kubheka and his technical staff.

The young Buccaneers continued to dominate over Amatuks before Foster scored his second goal of the match.