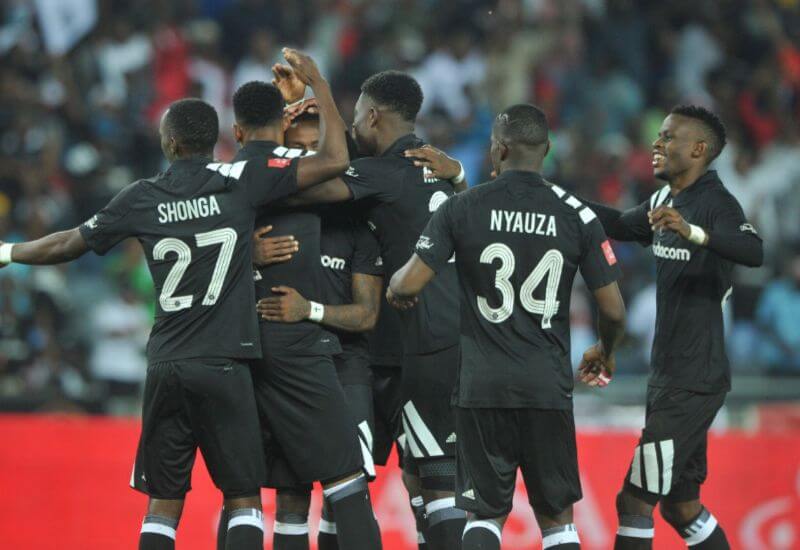 Orlando Pirates have bounced back with immediate effect from their defeat in Cape Town during midweek with a hard fought 2-1 win over Maritzburg United at the Orlando Stadium on Saturday night.

Goals from Thabiso Kutumela and Happy Jele were enough to see the Mighty Buccaneers collect maximum points and move to second place on the Absa Premiership table.

As expected, the match started at an electric pace as both sides sought out the all-important opening goal. The visitors were the better side early on with the youthful Bandile Shandu and Siphesihle Ndlovu proving a handful for Marshall Munetsi and Musa Nyatama. However, it would be Pirates who would create the real first goal scoring opportunity in the 11th minute with Justin Shonga forcing a save from the Richard Ofori after a mazy run.

The home side scored the opening goal just on the stroke of the half hour mark via well taken free-kick by Thabiso Kutumela. The diminutive attacker fired a curler over the towering United wall and past the outstretched hands of Ofori.

The 24-year old nearly made it 2-0 a few minutes later as pressure mounted on the Team of Choice. However, Kutumela's effort was finger-tipped over the crossbar by Ofori with Luvuyo Memela having provided a good cross.

Half time score 1-0 to Pirates

Pirates began the second-half brightly and they managed to double their lead through Jele. The experienced defender outjumped the United defenders to head in his first goal of the season from a Memela corner.

United almost pulled one back on the hour mark but were unfortunate to see Shandu's well struck effort beat keeper Jackson Mabokgwane only to strike the upright.

The Team of Choice threw everything up front but the kitchen sink and they were duly rewarded for their efforts in the 73rd minute when Siyanda Xulu headed home Deolin Mekoa's free-kick.

The visitors piled pressure on the Bucs defence in the closing stages of the game, but the backline was able to absorb the pressure and grind out a hard fought, well-deserved three points.

Following their three matches in seven days, Pirates now take a short break from league football and can shift their focus to the upcoming Nedbank Cup match against Ajax Cape Town next week.

The next league match for Micho Sredojević and his team will be on February 25 against Chippa United.