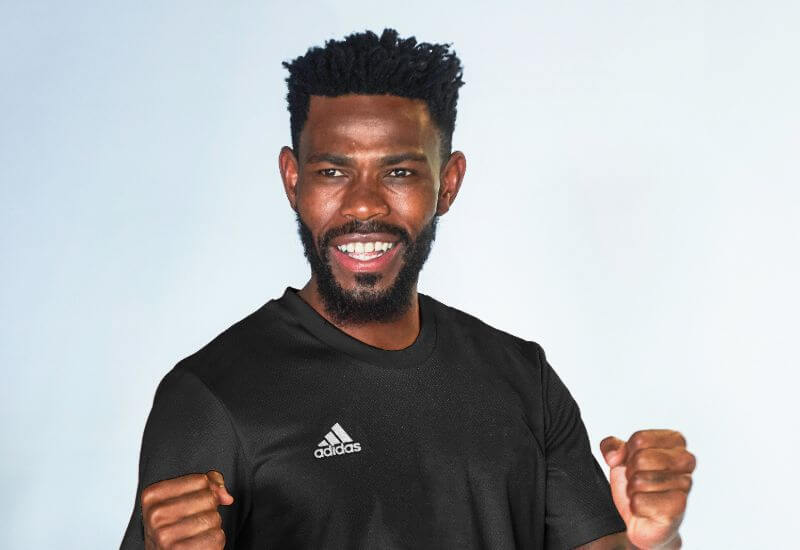 To borrow a phrase from Vince Lombardi when he described leadership. He said: Leaders are not born, they are made. And they are made just like anything else, through hard work.

This is what has epitomised Thulani Hlatshwayo’s career since his professional debut in 2009 for Ajax Cape Town. The Soweto born defender, has enjoyed a very successful career which has boiled down to one key quality he possesses. Hard work.

It's through this quality that Hlatshwayo has enjoyed such a successful career where he has gone on to captain the Urban Warriors, Bidvest Wits and even the South African national team.

The 30-year-old sat down with Orlandopiratesfc.com for an exclusive first interview in which he outlines his delight at joining the Buccaneers and his ambitions for his new club.

Welcome to Orlando Pirates. How does it feel to have finally signed for the Club?

Thank you for the welcome. It means a lot to me and my family. I am delighted to have finally joined Orlando Pirates Football Club.

We use the word ‘finally’ because its not the first time that the Club has been looking to get you?

Yeah for sure. That word will be used a lot. This is an honour and privilege to be here because I know how long the club has been after my services over the years. Unfortunately, the club was not able to sign me for whatever reasons but thankfully now I am here, and I have both Bidvest Wits and Orlando Pirates management to thank for that.

I have said before that one day I would like to join Orlando Pirates. I am happy, that day has finally come.

It was wildly reported that you had many teams looking for your signature. What made you choose to come to Pirates?

Honestly speaking there were other teams that were after my services but out of respect for them I wont mention them but as I’ve said earlier, I’ve always wanted to play for Orlando Pirates and secondly the club has been after me for a long time now.

Obviously, growing up in Soweto, one always dreams to play for one of the big teams and to play for Bafana Bafana. The timing was just right. I felt I was ready to make the move.

Ironically, your first match as a professional in 2009 was against Pirates. Do you recall that game and how was it?

I recall that game very well. Nobody forgets his first game. We played against Orlando Pirates in the MTN8 at Ellis Park [now known as Emirates Airline Park] and I think we won the match 2-1.

A lot of good players were in that Pirates team; Teko Modise was playing for Pirates at the time.

Even though I was wearing an Ajax shirt on the day, to see the team I supported as a young boy across the field from me was a surreal experience.

And now, that I am going to wear that [Pirates] jersey which I had admired for so long is a privilege for me.

As a boy from Soweto, is this a dream of yours to play for Pirates?

Growing in Soweto all boys dream of playing for either Orlando Pirates or Kaizer Chiefs. I come from a family where most people support Pirates, except my mother who supports Chiefs.

For me personally, I have always supported Pirates especially during the Kosta Papic era which had abo Tso Vilakazi, Joseph Makhanya and Lebohang Mokoena.

So, I can say it’s definitely a dream come true for me to be playing for this team, a team with such a rich history.

Our job now is to contribute to this history by getting the club back to where it belongs.

The Soweto Derby is the biggest match in the country. Are you looking forward to playing in your first ever derby?

Without a doubt, I consider the Soweto Derby, as one of the biggest matches in the world. I put it up there at the same level as some of the big matches in Europe and South America.

I am looking forward to playing in my first Soweto Derby. This is a match for the fans and communities across South Africa. But at the same time this is only one match, our goal this season is to be consistent over a period of time because at the end of the day the winning team [league title] will be the one that was most consistent throughout the entire season.

Judging by your time at Ajax Cape Town and recently at Wits, the number 3 has been your number. What number will you be hoping to wear at Pirates?

[Laughs] The number 3 jersey has been with me for my entire career. I had the number 3 at Ajax Cape Town where I had a successful spell there, then I moved up to Johannesburg to join Bidvest Wits. When I got to Wits, I was fortunate that the number 3 was also available and hence I took it over. I have become fond of that number; I have a personal bond with it.

But now I come into a team where the number has an owner in Thembinkosi Lorch. Whenever we were in camp with Bafana Bafana we used to joke about it that when I come (to Pirates) I will take the number from him but having said that, we haven’t had the opportunity to talk about it since I’ve arrived but I also will understand if he has a close connection with the number I will look for an alternative.

How much do you think you have grown and developed as a player over the last couple of seasons?

I would say as a player I have matured a lot over the years.

I have always learned to push myself; and as a captain you learn to lead by example and that comes with a lot of responsibility. The opportunity I got to captain Ajax, Wits and Bafana Bafana has also helped me grow as a player. At Bafana one is exposed to the best players in the country and we get to share invaluable experiences.

At a club level I have been fortunate enough to have always been surrounded by a lot of leaders and even though I wore the armband, they helped me a lot to understand that in leadership its about the collective and not the individual.

What is it like to join a new club, are there any nerves when you meet new teammates for the first time?

I’d say it’s always a nerve-wracking experience to join a new team and meeting new players but fortunately for me, I have played with a few of the players at the club.

For example, Amigo (referring to Luvuyo Memela), is someone that I have known from way back during our days at Ajax Cape Town. Ben (Motshwari), (Vincent) Pule, Xola (Mlambo) and Ghaba (Mhango) all from Wits; they all know the person I am, and I know them as well which makes it easy. The captain Happy Jele is someone I am close to and we spend a lot of time together off the field.

All in all, I would say that my first day went well. The guys welcomed me with open arms. I never had a moment where I felt uncomfortable because the guys were always around. The place already feels like home.

Any message for the Ghost (supporters)?

I would like to thank the supporters for their warm messages of support. Even when I was playing for Wits, the Pirates fans that I used to come across were always supporting me and giving me words of encouragement and now that I am here I want to say thank you.

I also understand that even though I am a name that most of the supporters are familiar with, I will also need to earn my respect and I plan to do so by giving my all in every opportunity I get to wear that Pirates jersey.

Once a Pirate always a Pirate.