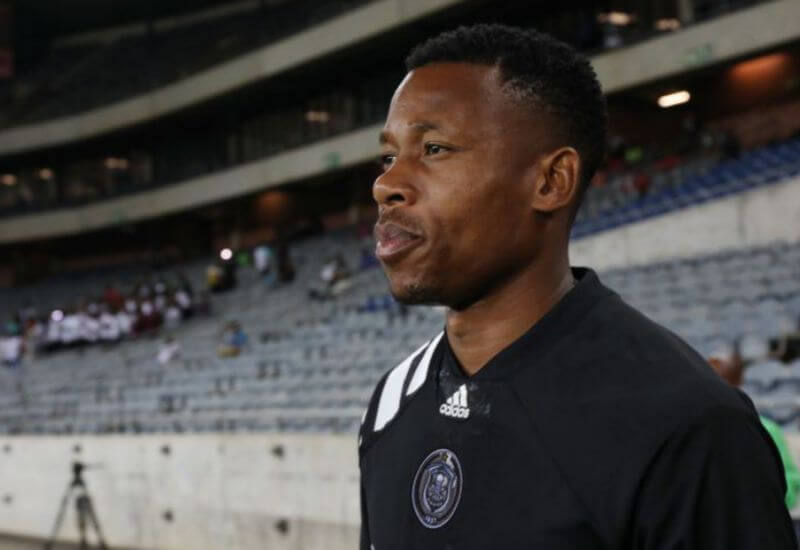 The win over Bloemfontein Celtic on Wednesday evening was special for many reasons. For the collective, the win ensured that the Buccaneers keep their league title aspirations alive, but for the individual – Happy Jele to be exact – it was an evening which marked a significant milestone.

The 31-year old achieved a landmark which many professionals can only dream of when he took to the field on Wednesday for his 200th appearance in the Absa Premiership.

“It’s a very special one for me, I don’t even have the words to explain how I’m feeling right now. It’s an honour for me to play for this Club for so many years. I realise that it’s not easy to get this far and that’s why I’m so proud and blessed to have lasted for this long. I’m struggling to deal with the emotion of it all, I am just so overwhelmed and it’s a bit difficult to even speak about this achievement.”

Jele joined the Mighty Buccaneers back in 2006 as a gangly and youthful right back. Fast forward 12 years later and that lanky frame has been wrapped with lean muscle, a Double Treble and the captain’s experience of two continental finals. He now finds himself playing more as a centre back and no longer marauds down that right flank like in his early days.

“It has been a great experience winning trophies, playing for the badge, growing as a player and as an individual. All of this has made me the person I am today. The one experience that will always stay with me though, was my knee injury. I seriously thought my career was over and that I would never play again. But the support I received from the team, from the supporters, my manager, family and friends made me believe in myself again. I was inspired to fight for a comeback.”

“Everything in my career has brought me to this moment and I must say that it has been a good experience. I would not change anything about it. I have to start by thanking the Chairman and the Club for giving me an opportunity to play, the Technical Teams that I have worked with over the years and the supporters of the Club. For me, these people all play a big part in this milestone because I feel we have travelled this journey together.”

Like fine wine, Jele has matured into a valuable member of the Orlando Pirates setup and by the looks of things, the Mpumalanga born defender doesn’t look like he is ready to slow down any time soon.

“The 200th match came as a surprise because I wasn’t counting, I just played and then heard it was the big number. So the most immediate thing for me will be to play the next game, then hopefully the next after that and see where that takes me, maybe another 200! When you are a young player, winning is everything. But as you get older, you realise that it’s not enough just to win. When I look back at what we’ve achieved over the years – it is a lot – but I am still hungry for more, both on and off the field.”

“When I lost my grandmother a couple of years back, I lost interest in a lot of things because the pain was so deep. But over time, I have found myself again and I'm 100% focused on the game and everything else around me. I am especially aware that I am a role model to many youngsters who will grow up to play football someday, as well as the new and young players in the team. I have a lot of responsibility as a senior player to show the new guys how to carry themselves both on and off the field, as well as show them the importance of doing things right. If I can do that to help the guys that I work with on a daily basis, and also inspire those that will come after my time is done, then I will be ‘Happy’ that I’ve served the game and this Club to the best of my ability.”

On behalf of the entire Orlando Pirates family Orlandopiratesfc.com would like to congratulate Happy for his remarkable milestone. Congratulations #Jele200