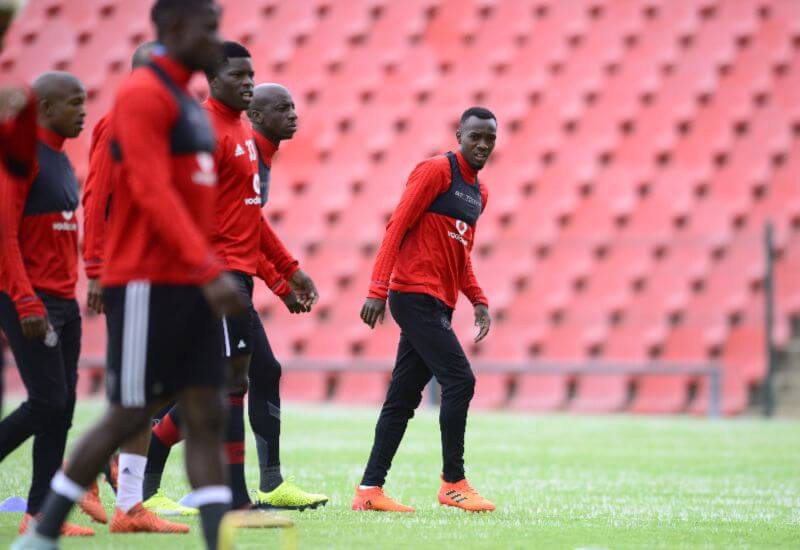 There’s a saying that “good things come in threes”. From fairytales to Hollywood blockbusters, the Rule of Three principle, or as the Latin suggests "omne trium perfectum", reminds us that things that come in threes are inherently more humorous, satisfying and more effective than any other number of things.

Justin Shonga add to yet another treble of accolades for Orlando Pirates as his March Goal of the Month Award, joined Musa Nyatama (Player of the Month) and Micho Sredojevic (Coach of the Month) in painting the PSL Headquarters Black and White as the Club was honoured in the monthly awards ceremony.

Shonga, a police officer by trade in his native Zambia, has been laying down the law with a string of consistent performances, underlined by his impressive brace in the Buccaneers’ 4-2 demolition of Chippa United at the Nelson Mandela Bay Stadium. Fondly known as ‘Sheriff’ by The Ghost, it was his second goal in that match that stole the show, a cracker taken from outside the box in the 93rd minute. The goal not only buried Chippa United and ended the game as a contest, but it put the Zambian international in the running for his first PSL accolade in the colours of the Mighty Buccaneers.

Orlandopiratesfc.com caught up with Shonga after being presented with the award, to get his impressions of the moment that fired him to the award.

“Coach Rhulani called me back asked me if I knew what my strengths were, what I’m made of, and what I can do. I told him about my power and he sent me off and told me to make use of it. Immediately after he said that, I scored my first goal. When Thembinkosi Lorch scored our third goal it was still very tight because Chippa had been attacking us. We had a one goal lead at that stage and knew that they could come back at any moment. We didn’t let them back in though, because as they were trying to settle, I scored the fourth goal. They opened the door, just an inch, and that’s all I needed to put my technique to work and hit the ball with power.”

Take us through your technique

“You have to practice at training all the time because practice makes things perfect. When we are done with the main training session, we stay back and take shots at the keepers. There’s a lot of experimenting and trying different distances and angles. You also have to be focussed, it’s not just about kicking at goal because each angle and distance requires a different application. The ball is moving, rolling, bouncing, coming across you, coming from behind… there’s players around you or you are alone. All these scenarios can happen in a game and you need to think quickly and react correctly. The more you practice at training, the more natural it becomes during the match.”

Your ambitions at Orlando Pirates

“Like every new player, the first thing is to understand the game model and your team mates. This is very important. I wasn’t part of the pre-season training so I had to work even harder to catch up to a team that had been together for a long time. I didn’t know our game model and I had to learn a lot of things very quickly. I’m still on that learning curve. So once that understanding gets a little better, you start fighting to get into the team.”

“Now that I’m in the team, my ambition is to stay in the team for as long as possible. And in order to do that, I have to keep contributing by scoring goals or creating chances for my team mates to score goals. And in order to do that, I need to know exactly what the coaches want and show that I can apply that correctly on the field. I worked hard to find a position and I maximised on the short game time I had because I wanted show how I could assist the team to get positive results.”

“As an attacking player, ultimately you will be judged by scoring goals, and I like scoring goals. The scoring started in the Platinum Stars and Chippa United games and I’m hoping that it doesn’t end there. I am surrounded by quality players who can unlock defences and send guys like me clear on goal so it’s important that I keep working to be in the correct space to receive the quality that they work so hard to provide. Sometimes I have to be the one to fight when I’m in possession – dribble the opponent, play the one-two, and release others – whatever it takes to assist the team. So if I don’t score, I need to be able to contribute positively to the team’s objective and that will make me happy.”