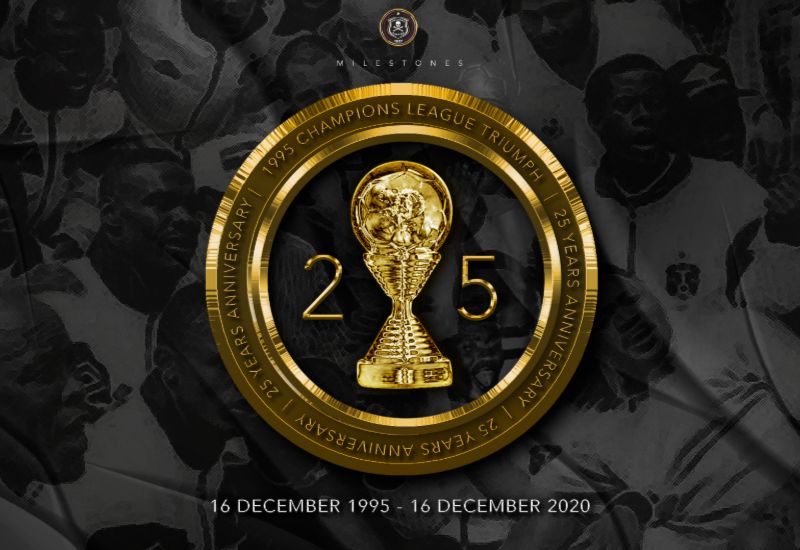 Twenty-five years on this day, Orlando Pirates made history by becoming the first South African club to claim the most prestigious prize in African club competition.

In their first appearance in what was then called the African Cup of Champions Clubs, the Buccaneers went all the way, scoring a crucial away win in a double-legged final against Asec Mimosas.

Orlandopiratesfc.com spoke to two Club legends who played a vital role in ensuring that the coveted piece of silverware finds a home within South African shores.

One of them was speedy midfielder, Helman "Midnight Express" Mkhalele, who scored in the home leg of the final against the Ivorians.

Now coaching SA's national Under20 men's team, Mkhalele said the triumph conjures up good memories as it was unexpected, and is proud to have contributed to the Club's great history.

"With it being our first appearance (in the tournament), it was so exciting. It's something that will live with me forever,” said the 51-year-old.

"Whenever I see Orlando Pirates, whenever I see the star (on the badge), I always think... we're part of the history that was made by the Club, together with the teammates that I had during that time."

Orlando Pirates' campaign meant that they had to make stops in Swaziland, Nigeria, Gabon and Uganda before concluding their crusade in the Ivory Coast.

Mkhalele says the tough itinerary made returning with the big prize all the more sweet.

"We managed to overcome the challenges of travelling in Africa under difficult conditions. We managed to go out there and be victorious."

The other Club legend who shared his experience is popular defender, Edward 'Magents' Motale, who ranks the experience at the top of his achievements as a player.

"For me, it's definitely the biggest moment of my career," he told Orlandopiratesfc.com. "A really great memory. I can say it was my biggest achievement as a player."

Both former greats witnessed the Club end a long trophy drought over the weekend, and agree it could be a springboard to greater things, including conquering the continent, for the current crop of players.

"It (the MTN8 cup win) is a big confidence-booster," Motale said. "Now they know they are capable of winning. If they maintain their consistency, it is possible."

Mkhalele compared the barren period the Orlando Pirates team of the 90s had to endure before lifting the National Soccer League title in 1994 - a triumph which booked them a spot in the Champions League - to what the current squad have recently gone through.

"I'm just imagining the feeling that the boys are going through right now, and we went through the very same feeling of saying 'Wow, we have made history for ourselves. After a long time, the team has now won the championship'," Mkhalele said.

"We took that feeling to the Champions League, where we never thought we would make history. We just went in there, worked hard, and maintained good team spirit."

Referring to the current crop of Orlando Pirates players, Mkhalele believes that the group coached by Josef Zinnbauer have more in terms of individual talent than the highly-decorated squad he was part of.

"I think right now the motivation is high. They just need to put it together as a team, and we can have another star."

Motale also offered advice on the team ahead of their continental excursions, emphasizing the importance of winning at home.

"The most important thing is winning your home games, because it is very difficult to beat teams away from home.  Plus, you need to defend well and take all your chances."