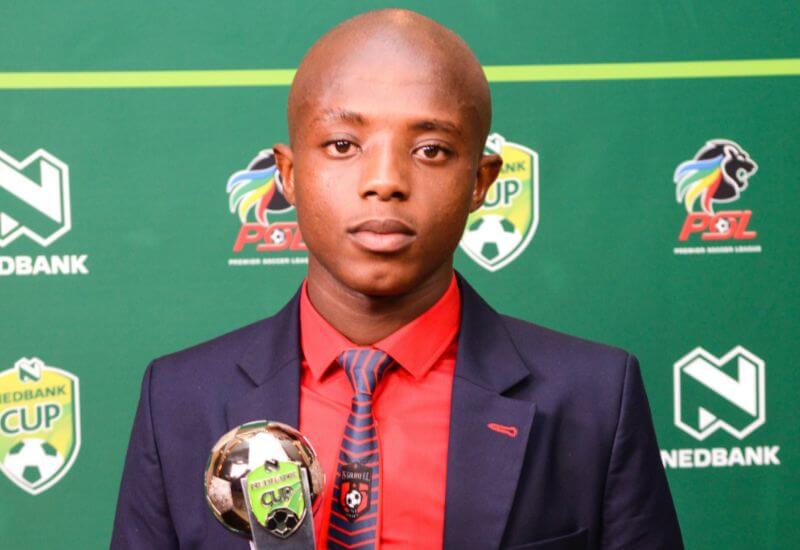 The symbolism of the curtains coming down on the illustrious career of a footballing legend in Siyabonga Nomvethe at the PSL Awards on Sunday last week, coincided with the christening of a rising star in the form of 22-year old Lerato Zakhele Lepasa.

The past five months have been the stuff of dreams for the Soweto-born striker. In that short period, he has gone from a relative unknown in the football circles to becoming a Nedbank Cup champion and top goal scorer of the tournament while on loan at TS Galaxy.

So meteoric has been his rise, that the young Bucs hitman has also fired himself to a national team call-up ahead of the COSAFA Cup, due to kick off in Durban on 25 May.

“The past five months have been crazy, but it’s also part of a process that has brought me to this point. I have moved from Johannesburg to the Western Cape and back to Joburg chasing my football dream, and it’s in this short time that I sit here with a national call-up and a winner’s medal from the Nedbank Cup. It’s crazy!” said Lepasa.

The Nedbank Cup Player of the Tournament was quick to point out however, that the 2018/19 season wasn’t as smooth and easy as it appears. And rightly so, because earlier in the season the Club had loaned him out to Stellenbosch Football Club where he got limited game time partly because the striker he was contesting with, Iqraam Rayners, was scoring goals for fun.

In those first five months at Stellies he was only able to register two starts and three appearances off the bench.

Following his limited game time at the eventual NFD champions, he was recalled by Orlando Pirates and it was during the January window that TS Galaxy came knocking.

“The move to Galaxy was an exciting prospect for me because they have a small squad of largely young players. I knew it was going to be tough to join them though, especially as a new player in the middle of the season but they welcomed me and made it easy for me to settle down.”

“I also came in knowing that the most important thing was to work hard and show the coaches that they didn’t make a mistake in bringing me on board. I made sure that I repaid their faith in me by contributing whenever I got the chance and I’m grateful that there is a good story to tell for all of us at the end of the season.”

It’s all about learning

The journey to upper echelons of football is different for all players of the game. On one side you have the likes of France’s Kylian Mbappe who hit the ground running from the start, who at 19 became the 2nd youngest World Cup Winner and goalscorer in a final after the great Brazilian Pele did it six decades prior as a 17-year old. Then you have a Francesco Totti who went on to become the talismanic captain and legend at his beloved AS Roma, having started there as a 13-year old development player. There are also journeymen like Tottenham’s Harry Kane who went out on loan – not once, but four times – before coming back to become the top man at Spurs, as well as captain of the England National Team.

Many may not recall however, Kane went out on loan to Leyton Orient, Millwall, Norwich City and Leicester City before making a name for himself at White Hart Lane.

For Lepasa, the journey begins similarly to that of Harry Kane’s. He began with the Orlando Pirates Promotion League team, where he raised some eyebrows with his physicality and attacking intent. He was moved up the ranks within the Club structures where he went on to spearhead the attack in the Buccaneers’ SAB League side as they swept all and sundry on their way to winning the Gauteng league as well as the Motsepe League Promotion Playoffs at the first attempt. In both instances of the league run and playoffs, Lepasa claimed the mantle of top goalscorer.

His efforts were rewarded once again, this time with a call-up to the Project X side which toured Brazil in 2018. It was on this tour that Lepasa began to flourish with his dominant displays which saw him impact eight goals – netting five and contributing three assists in the five matches played against Rio’s elite clubs.

The growth and learning didn’t end there, as Lepasa returned to Johannesburg and was immediately thrust into both of Orlando Pirates’ first team pre-season camps, under the eye of coaches Micho Sredojevic and Rhulani Mokwena. His senior team stint saw him join the tour to Zambia where he would test his mettle against the likes of Power Dynamos and the 11 times African club competition champions TP Mazembe of the DRC.

Following the brief safari across the border, that return signalled yet another change of clothes and packing of bags as he set off for the loan spell to the NFD, beginning in the Cape Winelands with Stellenbosch FC.

“I am someone who doesn’t believe in mistakes. I think everything that happens to us, does so for a reason. The key is whether someone chooses to ignore what has happened or to learn from it. For me, it’s the latter.”

“My time at Stellenbosch, albeit limited was not a waste. I thank the team for giving me an opportunity but at the end of the day it just didn’t work out. This is football. The two loan moves have opened up my eyes as to what to expect and as a student of the game I always look to better myself.”

Lepasa is not in bad company, given the current Bafana Bafana internationals plying their trade with the Soweto Giants. Fullback Innocent Maela spent three seasons at Thanda Royal Zulu (now Richards Bay FC) before returning to become a regular marauding feature down the flanks of the Buccaneers and the national team; while PSL Player of the Season Thembinkosi Lorch earned his stripes along coastal lines, turning out for Cape Town All Stars and Chippa United before coming back to light up the domestic league in the famous Black and White jersey.

Lepasa is due to return from his loan spell at TS Galaxy where he is expected to be part of the Buccaneers pre-season setup.