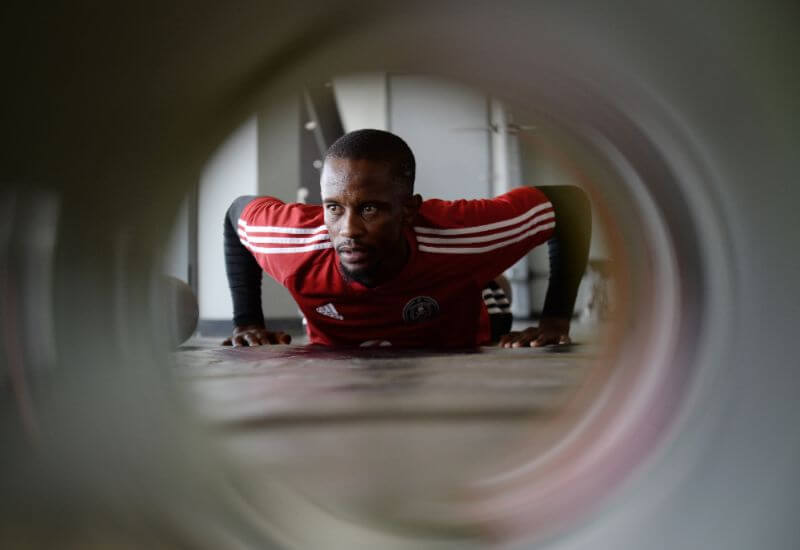 As a popular adage goes, opportunities don’t always come along but when they do grab them.

This appears to be what midfielder Linda Mntambo has done to date. The free spirited 30-year old has gone from benchwarmer to regular starter in recent matches for the Sea Robbers; and now a date with the biggest game for any South African player beckons.

Mntambo, who recently walked away with the Man of the Match award in Pirates’ 1-0 victory over Highlands Park on Tuesday night; has expressed his delight at the prospect of starting his first Soweto Derby against Kaizer Chiefs in the Telkom Knockout on Saturday.

A Derby – like many can attest – is no ordinary match.

Mntambo, who hails from Soweto, reveals how special this game is; not only for him but for the entire Mntambo household.

"Look, this is no ordinary game,” reveals the man they call Figo. “I am Orlando Pirates through and through. Ever since I was a kid, this is the first and only team that dominated discussion at home.

“My first memories of this wonderful club was seeing the family fast whenever the team played. Even today my mom still fasts for every game that we play. Pirates is more than a Club to us at home. This is who we are, this is what we believe in. Orlando Pirates defines our very existence.”

He added: “My grandfather was one of the founders of the team, this is why this team is so close to my heart.”

However, despite the obvious bond that exists between Mntambo and the club, the midfielder is quick to point out that its hard work and nothing else that matters when it comes to playing for his childhood club.

"I am pleased to be living what was one day only a dream but now that I am here; one is fully aware of what is required to continue playing for this club. I don’t romanticise my relationship with Pirates; this is my job and in order to stay employed at any job one needs to continue working hard and contributing positively - that’s what I focus on every day.

"I’m glad to see that all of my hard work on the side-lines is beginning to bear fruit. I look to build on to the three consecutive games that I have started in order to become a regular in the team but obviously it wont be easy because I play for a team that has many quality players in every position but at the same time this serves as motivation to keep me on my toes.”

The Buccaneers, who come into this upcoming cup clash on the back of a long-awaited victory over the Lions of the North, will be desperate to build on this result. However, Mntambo admits that the players do feel the pressure of having to turn the teams’ fortunes while at the same time sustain the dominance they have had over the neighbours in the recent past.

"To be quite honest there has been lot of pressure, if you look at our previous games, we created a number of chances but we hardly scored. The win against Highlands Park is a great confidence booster but we have continue working hard because Chiefs is going through a purple patch right now. We have been analysing them and they are firing on all cylinders which makes us underdogs for the game over the weekend.

“We understand the importance of this clash and the need to win it. This is more than playing for a place in the next round of Telkom (Knockout) or collecting three points at the next Derby.

“We are fighting for our pride, for bragging rights for the glory and honour to be the kings of Soweto. Our fans need a win, and as players we want to give it to them,” he concluded.