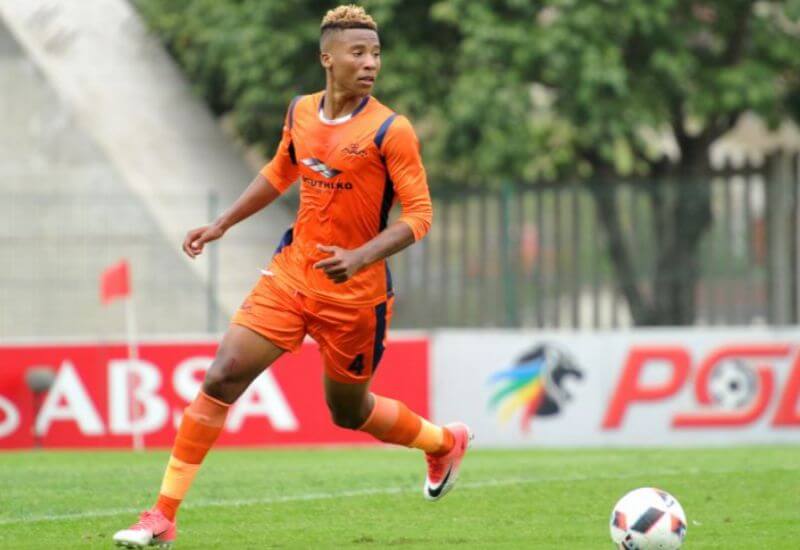 With seven games to go and 12 points adrift, Brian Hlongwa and the Real Kings still have their eyes firmly set on the NFD prize. For as long as it’s mathematically possible, Hlongwa refuses to rule out the possibility that his side have nothing but second place to play for as the league draws to a close.

Having established himself as a regular and key thread to the fabric of Coach Simo Dladla’s royal outfit, Hlongwa continues to train and apply himself each day as if he was still on trial. A testament to his character, and one that will stand him in good stead for his future as a professional footballer.

Orlandopiratesfc.com caught up with ‘Ramos’ on an off day – something which is rare in his personal training schedule outside of what the team puts forward.

SO FAR, SINCE WE SINCE WE LAST SPOKE

“I’m taking a breather today, we had an off day and I’ve also given myself off from my usual program. We’ve been working hard as a team and we need to recover so we can be at our best for the last push towards the end.”

“I’m still in a happy space because I’m playing and enjoying my football. I’m as excited as when I got here because every day brings something new and I’m always learning.”

KINGS ARE 12 POINTS BEHIND HIGHLANDS PARK

“It’s not impossible for us to catch them. As long as we both still have games to play, anything can happen. We are just worrying about the next game and running our own race. This has been the way we’ve been doing things from Day 1. When you start to worry about what’s happening around you and what other clubs are doing then you lose focus on what’s most important. The important thing for us is to keep winning our games, play our best and then leave the rest to God.”

“We play against very good and determined sides in the NFD, and every game is a final. Everyone wants to win their games and finish as high as possible. I think it’s a little bit harder for teams at the top and bottom of the league because every point is crucial to your survival. We were in the middle of the table at some point in the beginning but now we are second because we have stayed consistent. We just need to carry on with that.”

TOUGHEST OPPOSITION STRIKER IN THE NFD

“I can’t pinpoint one specific striker because they all come with their own qualities. One thing that is certain is that they are all very different. I can’t say that these two are the same, or these two need a specific approach. That’s what keeps the games exciting for us as defenders.”

“For me, the training is all inclusive in its approach and preparation. I work on all my elements of defending because on match day you never know which striker will show up. So I work as if I will face a guy who is tall and good in the air, or strong and fast, or uses one foot or the other. In as much as we prepare for the teams and have an idea of who is in the squad, the coaches switch things up at any time to try and disturb the opposition’s game plan.”

WHAT HAS YOUR LOAN EXPERIENCE TAUGHT YOU

“The experience has taught me to be professional in my approach. I have learnt to respect my job as a footballer and respect my teammates and technical staff. It’s not to say that I didn’t do it before, but when you are in the juniors you play with your friends and age mates. So when something goes wrong it’s easy to react in a certain way because we are all kids and buddies. Out here, you are playing with people from all walks of life and different experiences. Some are older than you so you need to behave accordingly, even in the heat of battle. There are valuable life lessons because how you conduct yourself on the field also says a lot about who you are.”

“I’ve not only grown as a player, but as an individual as well.”

BEST & WORST MOMENT ON THE PITCH SO FAR

“The best moments were when I arrived. Meeting up with new teammates and a new technical team was an exciting prospect and the best thing is that we have now become like family. We spend a lot of time together, even off the pitch, so naturally the bond is tight. That’s one of the best things. And winning games obviously.”

“The worst has to be when we lose games. I hate losing! Draws are also not cool. I can handle certain draws, depending on the manner of the draw and how we played. But losing, that’s the worst thing for me.”

“In any team you pick, there has to be players who are good with the ball at their feet. So my keeper would be Ricardo Goss. Not only is he a good keeper, he can also play the ball. You need that in the build-up and he then also acts as an extra player in the attack.”

“In defence it’s myself and Siyavuya Ndlovu. He is my partner in crime. When we are on form I feel like we can mark anybody in the world! And even better in tight spaces because we work hard on being close enough to cover each other if one goes out.”

“In the middle I would have Ntsako ‘Neverdie’ Makhubela. He’s a ball player and can control the game. He has an eye for goal and can find a pass anywhere. Upfront, it’s Nkosingiphile Phewa, our leading goalscorer. His work speaks for itself.”

The NFD table (with 7 games to go). Real Kings still have to play Black Leopards and Tshakuma FC who are part of the chasing pack.