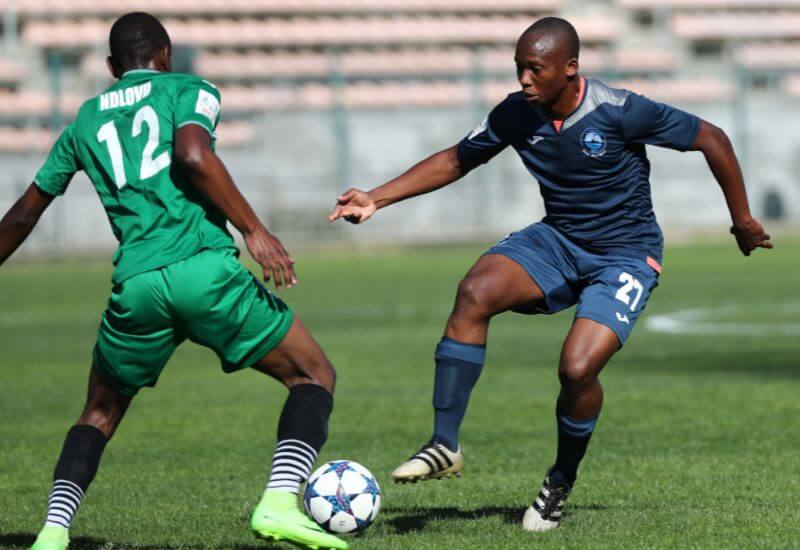 Former Orlando Pirates MDC player Lebogang Sentsho has been on loan in the National First Division with newly-formed outfit, Richards Bay FC, since the start of the 2017/18 season.

The Meadowlands-born defensive midfielder has had a tough transition into the rigours of professional football following his out-of-town move, but his tenacious character has led to him fighting for a place in the side and putting up performances that have kept him motivated and giving the coaches a selection headache come game day.

Fondly known as ‘Ace’, the Pirates Academy Graduate has been come a long way from his junior days, to forming part of the first Project X London Tour, and working his way up the ranks to a loan move in one of the country’s toughest competitions.

Orlandopiratesfc.com caught up with the tough-tackling midfielder, who is fresh from a Nedbank Cup victory where he scored in his side’s 5-0 rout of Bloemfontein Young Tigers.

The story so far

“It hasn’t been easy, I must be honest, but I feel like it’s starting to come together. I started the first few games, then got benched, then was left out the side completely. I was struggling for game time but kept working hard to fight my way back into the team. I also lost a bit of momentum when my mom was in hospital and ultimately passed on, but I just kept going.”

“It’s not easy being out on loan, especially out of town, because you are alone and far from your family. You have to block out so many things because your main aim is to get into the loan side so you can get game time and have something to bring back to your parent club. It’s tough.”

“Fortunately for me, my MDC teammates from last year are in the area. Sandile Mthethwa is at Richards Bay FC with me, while Brian Hlongwa is in Durban at Real Kings. We have each other and the Club also keeps in touch with us via the WhatsApp group and also by telephone.”

“It’s tough in the NFD because I’m competing with former PSL players who have a lot of experience, both in the league itself and also in my team. So when you get a chance to play, you have to grab it with both hands and run! The Nedbank Cup was a great day for me because I started the game and played about 85 minutes, scoring in the 70th. I was very happy to score because I had been working hard in the build up to the game and really felt like I was coming into some good form. The goal is even better for me because we won the game and got through to the next round comfortably.”

“It was a typical defensive midfielder kind of goal, where I came in from a deep run after our winger Khayelihle Shozi broke and crossed the ball to the middle. I got a nice lay off from my striker which left me one-one-one with the keeper and I made sure I found the back of the net. I don’t score a lot because of the position I play in, but I always try get forward to assist the attack whenever I’m in a position to do so.”

“We’ve got a new coach in charge and this has helped with the team dynamic. We are together as a group and the spirit amongst the players is very good. Everyone is energised and hopefully we can carry this momentum into the next game.”

“We are not in the best of positions at the moment, currently 13th on the table and we have a tough game ahead against Witbank Spurs. Everyone wants to do well so that we can climb up the table. It’s even more important as a new franchise because everybody is watching you and wanting to see what you are going to do. Staying in the league and finishing in a great position means that the sponsors are also more confident in the club and the survival becomes a bit more secured. The bigger picture is there for the club, but also as importantly, for myself and Sandile, if we finish well with the club then there’s a good feeling for when we come back home to Orlando Pirates.”