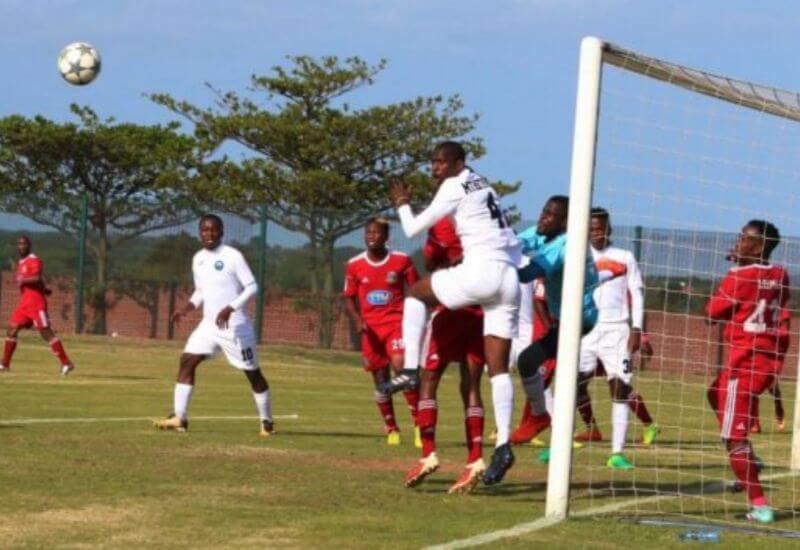 The 2017/18 season brought about many changes in the football landscape. With players pinning the flags to new masts in the transfer window, to clubs rescinding and acquiring statuses… the space was a flurry of activity and excitement well before the first whistle was blown.

Sandile Mthethwa, a former captain in the Orlando Pirates Reserves was caught up in this whirlwind of changes as he found himself on loan at the newly established outfit Richards Bay FC. Mthethwa’s rise has been somewhat meteoric and in the most unlikely of circumstances.

Having signed for the Bucs MDC side from Durban, he quickly established himself as a leader, taking the armband in the first ever Project X tour to the UK. He returned and promptly established himself as a permanent fixture in the National Under 20 side, alongside another Bucs loanee Tercious Malepe. After a successful CAF African Youth Championships and FIFA Youth World Cup stint, “Sanza” made his way into Stuart Baxter’s National Team for the COSAFA Championships before sneaking through the window and heading to the coast.

Shortly after their loss in the Nedbank Cup Last 16, Mthethwa opened up to Orlandopiratesfc.com about life in the city that is home to one of South Africa’s largest harbours.

NEW KIDS ON THE FOOTBALL BLOCK

“It’s a little bit of a strange one for us because as a club, we are new, but not that new as a team. When we were still operating as Thanda Royal Zulu, we were the only team in the area so there was a following that we had. As soon as the change in ownership and name came, I felt as though there was a bit more energy in the support because we became a team of the city, not just in location but in name as well.”

“There were some players that were part of the Thanda setup, so it wasn’t too much of a shock to the system for the club. But there were also a couple of new faces like myself and Ace [fellow Bucs loanee Lebogang Sentsho]. We all had to adapt to each other and to the new expectations of the owners and I feel like we are getting there nicely as things stand.”

“We have a nice mix of players with great experience and knowledge, and most importantly, we have the support of the people. They are with us whether we win or lose, and we appreciate that a great deal.”

“It’s going pretty well, I’m learning a lot with every game that goes by whether I play or not. I’m fortunate that the coaches have been confident in me and giving me game time so I know I have to keep fighting for my place so they can keep me in the plans. Last year I played about 13 or 14 games which is great for my development as a player, but it’s very tough to get into the team.”

“We have a lot of good players who are all fighting for positions so it’s not an easy job for the coach. The great thing is that we still support each other even if we don’t make the team and keep pushing each other at training. There’s always somebody giving you advice and reminding you not to mess up when you have the chance to play because they are right there waiting to take over! You have to be on your game. It’s a great spirit.”

“We are a team in all aspects, and sadly only 11 people can be on the field at one time.”

“It’s also nice being close to home because my family is able to come and watch me play, which wasn’t easy when I was in Joburg and obviously travelling with the national teams. My mom, brothers, even our neighbours back home in Dondolo have come to see me play a few times so it’s encouraging for me. It’s about 30 minutes from Richards Bay to my hometown so I took advantage of that in the early stages of the season, going home on certain weekends. I haven’t been home as frequently though because things have been tough for us here, the last thing I need is to go home and relax.”

WHAT HAPPENED IN THE NEDBANK CUP?

“The Cup is very exciting and for us to make the Last 16 in our first season is a good achievement. In the first round we won 5-0 but didn’t take it lightly going into the second round. We struggled in the game and ended up losing 3-0 to a very good Bloemfontein Celtic team. The 5-0 win came down to the level of quality between us and Young Tigers, and this time, Celtic had just more quality than us.”

“We did our best against Celtic and followed the instruction of the coach very well, but sadly there is a team that loses and this time it was us. The mood is still good though because the way we lost was no reflection on us and our ability. We just came up against a Celtic side that was super on the day. We weren’t dominated either, we were 47-53% possession. We created a lot of chances but where it counted, we didn’t convert them. In football, if you don’t take the chances you will be punished.”

“I also missed a goal scoring opportunity! We had a freekick and I was attacking the ball. The timing was perfect because it was something we had practiced as well. I went in with my left foot and in my mind I was already thinking about the goal but at the last moment it got cut out. It was the 7th minute and I’m pretty sure that if we took the lead in that moment we would have parked our bus and their bus in front of goal! Whatever it takes to win a cup game I suppose. It’s do or die.”

WHAT HAS YOUR LOAN EXPERIENCE TAUGHT YOU?

“I’ve changed a lot, and definitely grown as a player. I don’t see myself as a kid anymore. The intensity of training and focus has meant that I need to be more aware of what’s happening and pay more attention. Being on loan and in the NFD is perfect preparation for what will happen when you are playing in the PSL and in the first team. Nobody is going to hold your hand and massage your feelings here. It’s a man’s game and you have to get tough really quickly.”

“I’m also learning to control my aggression, which is key for a defender. It’s not to say that you must be soft, because a striker must know that you are there when he faces you. So channelling that aggression is very important, knowing when to be hard and knowing when to make the correct challenges makes a big difference. When you are reckless in your approach you put yourself, the opponent and your team in danger. There’s no place in football for recklessness.”

“I have to thank my coach, Jean Louis Losciuto. Since his arrival, he has been great with us and has been of great guidance and assistance to me personally. He speaks to me all the time and is strict in making sure that we do everything correctly and follow the team’s plan. He is a fighter with a high work ethic, and he likes his team to show the same characteristic.”

“It’s simple: we can’t afford to drop any points. Every point is crucial at this stage and it will be suicidal if we go into any of the games thinking that we are safe. We are in 13th place at the moment but only four points ahead of the team at the bottom. An unnecessary loss for us, and favourable results elsewhere could see us in the relegation zone. We have to be realistic with our expectations and make sure that if we are to win any games, it has to be the ones at home because the majority of our remaining games are on the road. Win at home and draw away, maybe even steal a win away… that’s the objective. But we cannot lose any games. We have to believe and work towards that.”

“It’s very important for a new team to do well in its first season and we struggled a little bit in the beginning. We have to forget about where we came from and how we started the race because the most important thing is how you finish, and who is waiting for you at the finish line. Our fans come in numbers to support the team and that helps us a lot. We have to think about them when we play because some come from far away. It’s about them and making them happy and making sure that we are all at the finish line safely together. We have to stay in the NFD this season and then build on that in the new season.”

“The toughest striker has to be the guy from Highlands Park, he’s a Namibian striker [Peter Shalulile]. He is very quick and doesn’t hold the ball much, so you have to keep close to him. The moment you give him space then he’s gone! Most strikers in the league like to hold on to the ball and it makes it a bit easier at times to mark them because you get used to them turning in certain ways or moving in certain directions because they are either left or right footed. It’s not to say they are easy to play against, but Shalulile is the toughest for me.”

The NFD table (with 7 games to go). Richards Bay still have to play Mthatha Bucks (away), Super Eagles (home), and Ubuntu Cape Town (home) who are part of the relegation pack.