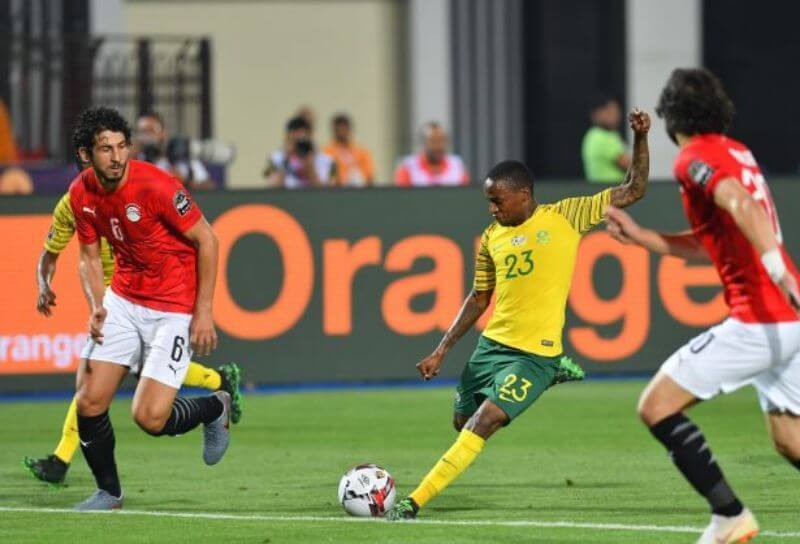 Thembinkosi Lorch stepped up when it counted on Saturday evening, scoring a last minute goal to lift South Africa to a 1-0 victory over host nation Egypt at the Cairo International Stadium.

Cometh the hour cometh the man. Some things, it seems, are just meant to be.

Days leading up to this match the name Thembinkosi Lorch dominated the headlines. Would he start? or would he sit on the bench for the fourth consecutive game for Bafana Bafana?

Thankfully for the 55 million plus South Africans, it was the former with Head Coach Stuart Baxter opting to give the South African Footballer of the Season his first start of the 2019 CAF African Cup of Nations.

Egypt came firing on all cylinders as they looked to cap their 100th African Cup of Nations match with a victory.

The hosts were spurred on by their dynamic duo of Mohamed Salah and Mahmoud 'Trezeguet' Hassan. But fortunately South Africa were able to deny the hosts an early goal.

It wasn't a one-way affair as South Africa also threatened early on mainly through Percy Tau. The forward twice tested goalkeeper Ahmed El Shenawy with powerful left-footed shots. The first was well held by the keeper, while the second (which was direct from a free kick) called for an outstanding save to keep the score line blank.

Midway through the first half the Pharaohs created their first clear chance, with a counter attack gifting Hassan a sight of goal with only Ronwen Williams to beat.

SA continued to try their hand at shooting on goal, with Thembinkosi Lorch and Kamohelo Mokotjo both firing shots just wide of El Shenawy's right-hand post, but the first half ended with the teams locked at 0-0.

Egypt had the first clear chance of the second stanza and again it was 'Trezeguet' who squandered a great opportunity: Mohamed Salah's defence-splitting pass picked out the Pharaohs' number seven, but he hit his shot straight at Williams in the 57th minute who did well to absorb the shot.

Bafana Bafana put together a fine passing move in the 73rd minute to put Lorch in on goal, but he too was guilty of shooting straight at the goalkeeper, allowing El Shenawy to make a comfortable low save.

The match looked set for extra time, but on the 85th minute mark South Africa struck on a quick counter attack: Lebo Mothiba beautifully played in Lorch, who showed great composure to slide a shot beyond the 'keeper and provide the decisive moment for the visitors.

The last five minutes were all about keeping the Egyptians at bay as the South African defence displayed grit and determination until the end.

Bafana Bafana now move on to the Quarter Finals where they will face a familiar foe, Nigeria.