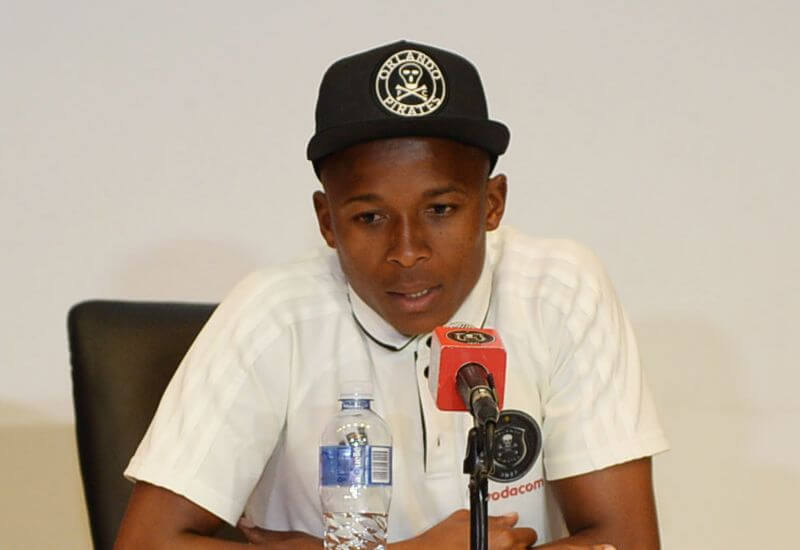 In 2017 Luvuyo Memela showed sporadic glimpses of good form, however 2018 has proven to be his year as he grows from strength to strength and continues to be a marvel to watch. He was instrumental in the Buccaneers’ triumph over Mamelodi Sundowns, sealing a comprehensive victory over the Brazilians when he hammered the final nail in their coffin as the Bucs romped to a 3-1 win in Pretoria.

Fast forward two months later to the biggest game in the local football calendar, Memela, like a delectably baked chocolate cake rising to perfection in the heat of an oven, the Bucs man rose to the occasion supremely to play a vital role in seeing off arch-rivals Kaizer Chiefs. Coming on as a second half substitute, Memela showed his quality in netting a brace in the much anticipated and all-important Soweto Derby.

Orlando Pirates next fixture is in the Nedbank Cup on Wednesday, 14 March 2018. The Mighty Buccaneers travel to the Mother City, where Cape Town City lie in wait at the Cape Town Stadium in the Round of 16.

Orlandopiratesfc.com caught up with ‘Meme’ to hear his thoughts as a Cape Town homeboy, on the prospect of playing in front of his home crowd.

Expectation of playing away against Cape Town City?

“It’s not going to be easy playing against Cape Town City away, they are a good side playing good football and with a very clever coach in Benni McCarthy. They play attacking football and we expect them to come hard at us from start to finish.”

“That being said, we also have a very good Technical Team in Coach Micho and Coach Rhulani. We’ve had the whole week to study them carefully and come up with a plan of how to deal with City on the day. For us, the preparations are two-fold. Firstly, we have studied the opponent and tried to identify weaknesses that we can exploit during the match, and secondly, we have worked on our own game and performance to make sure that regardless of what comes our way on match day, we are capable of dealing with it.”

There’s a school of thought that Gauteng teams struggle with Cape Town’s weather. Our last result (vs Ajax) supports that argument. Do you agree?

“Not really, I don’t believe that Cape Town has a negative impact on us. Sure, the weather might be slightly different and changes frequently in a short space of time, but not to such an extent that it would have a direct bearing on the result. We have played in PE, which is windier than Joburg and Cape Town, and we have played in Durban which is more humid. In both cities we have frequently come back with positive results under different conditions to what we are used to.”

“I don’t think we struggled against Ajax Cape Town, in fact if you look at the possession stats as well as the number of scoring chances created, we completely outplayed them. We just lost concentration three times and we were punished three times.If we stay sharp from the first minute until the final whistle then we will come back victorious. This Cape Town loss story is all in the mind.”

How important is it to win the Nedbank Cup match on Wednesday?

“It’s very important for us to win because we want to win every game we play. We haven’t won any silverware in a while and people are talking about our form and already making us out to be the cup winners, but our thinking is not at that advanced stage yet. We are not thinking of the championship yet because we have a difficult task ahead of us with the Cape Town City clash on Wednesday.”

“We have to approach this match like we have done with every other match, with thorough analysis, preparation and a positive mental attitude. I believe that when we get it right by following instruction and playing to our strengths, there is no team that can deny stop us. Even if we play in the Cape Town weather, or anywhere in the country!”

You are the comeback kid; how does it feel to be back home for this Nedbank Cup encounter.

“I’m very happy that I’ll be playing at home, it’s not every day that you are watched by your family live at the stadium. I am excited to play in front of my mother and I want to make her and my family proud, but I also understand that I can’t afford to be carried away because my job and primary responsibility on match day is to my coaches’ instructions and to the benefit of the team.”

“As Buccaneers, we have the unusual advantage of playing at home wherever we play. I am grateful for the overall support that we receive from The Ghost – our family of supporters who are always there for us. They support us when we are down and they encourage us to do better when things are not going our way. I have played for other teams before but never experienced the love and support we get from the Orlando Pirates fans.”

“With all the support nationwide, I must admit that playing in Cape Town is something special. These are my people who understand the struggles I have been through and I always want to do my best when I play there because I understand the challenges of the communities very well. I understand the need to escape poverty and aspire to do better than the circumstances you were born into. If I can touch one kid and prove to them that there is a way out if you believe and work hard enough, then I will be happy because I will have contributed positively to my community. If each one reaches one and teaches one, as a community we will be in a much better place than where we are now.”