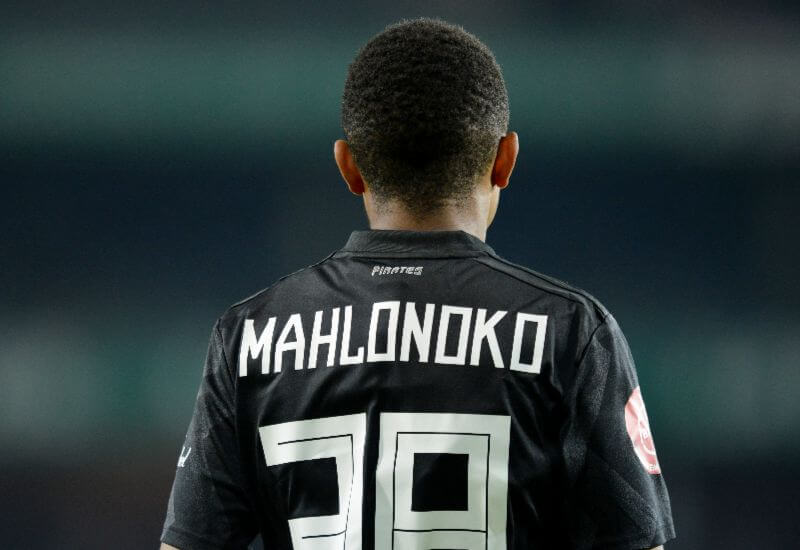 Augustine Mahlonoko has expressed his delight at having made his debut at Orlando Stadium in Orlando Pirates’ opening match of the 2018/19 season.

The Pirates technical team unleashed the young prodigy to the world in the 1-all draw against the Lions of the North on Saturday evening.

The 16-year-old came on as a substitute for fellow debutant Vincent Pule in the 87th minute. It was only three minutes but just in that time, the product of the Pirates academy looked comfortable in his new surroundings.

Mahlonoko is not the talkative kind, preferring, the famous football adage, to let his boots do the talking. The assured manner in which the youngster carried himself in front of thousands of supporters inside the bowl of the Mecca of South African football, are hallmarks of a player destined for a very bright future.

‘Meteoric rise’ is a widely used term in football, but it’s hard to ignore this young man’s astronomical climb over the past couple of months. Just over four months ago, Mahlonoko was playing for the Club’s u17 squad and competing in the Gauteng Future Champs now he is rubbing shoulders with some of PSL royalty.

Two minibuses made their way from the Vaal to Soweto and on board was the family and close friends of Augustine Mahlonoko.

It has been a whirlwind six months for the Sebokeng-born youngster, whose stock has been on the rise since bursting onto the scene with a stunning goal at the u17 Future Champs tournament in the early stages of 2018.

Amid the increasing attention, the softly spoken Mahlonoko has remained grounded, and it became evident as to why after speaking to his father Paul Mabote.

Speaking to Orlandopiratesfc.com after his son’s debut, Mabote was beaming with pride.

“He has done very well to get to this stage and while we weren’t expecting him to play, we are very happy and proud that he got his chance.”

“We came in two minibuses today to support him and the team.”

When the 16-year old stood from the bench on preparation to enter the game, his father became evidently nervous.

“I don’t know who was more afraid between me and him. I was certainly shaking with anticipation. The game was tight and he was thrown in so naturally as a parent I was wondering what would happen.”

“He did very well though, had a couple of good chances and even looked like he would have his first shot on target after he carried the ball through the middle. At home, we know he has a good shot, but also knowing him, he probably wanted to respect his big brothers by sharing the ball and not looking for glory.”

“He is like that, very respectful. In time he will learn to take the correct chances at the right time to the benefit of those around him.”

“We are very happy that this is the path that his career is taking. I would like to thank the Club management, coaches and his teammates for this opportunity that has been presented to Augustine.”

“He still has a long way to go, and needs to remember that while he has played a few minutes on debut, it doesn’t mean he can relax. And if he doesn’t play, he shouldn’t take it as an attack on him.”

“He needs to understand that if he keeps working hard and using the chances he gets, he can only get better as a player, which is what we all want.

So where does the Vaal-born midfielder rank alongside other young Bucs debutants of the past?

Prior to his debut on Saturday evening Lyle Foster held the club record for the youngest debutant in the PSL era.

Foster who turns 18 next month, made his debut at the age of 17 years old and 12 days. Foster’s debut came in the goalless draw against Maritzburg United last year. With this debut, the burly striker overtook Lebogang Mokoena who had held that record for 15 years. Mokoena made his debut on the 1st November 2003 at 17 years and 3 months old.

Mahlonoko is now the youngest Pirates player to make a professional debut at 16 years and 352 days old.