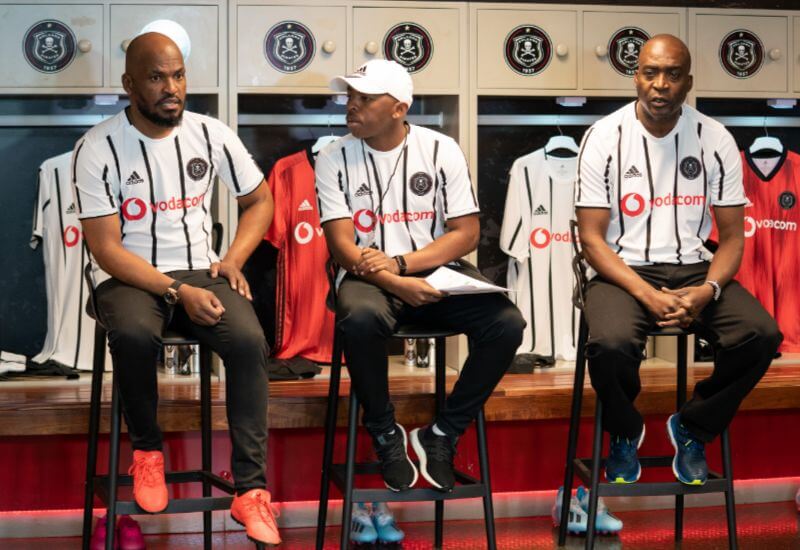 In difficult times — and these are among the most difficult in recent Pirates memory — there’s no telling how the changeroom will respond to the prolonged win-less run it has experienced lately.

The middle of August presented easily one of the worst seven days in the Club’s history as they lost three matches on the trot without scoring a single goal, and in the process were dumped out of the MTN8 Cup at the hands of Highlands Park, to add to the loss in the CAF Champions League to Green Eagles.

Whilst the Buccaneers will have to wait another year to try their hand at the MTN8 trophy, it’s the Champions League that the men in Black and White can still salvage.

The Soweto Giants come into this encounter trailing Zambian outfit 0-1. Despite trailing, the hosts have the firepower to overturn this deficit. However, in order to do so, Rhulani Mokwena’s men will need to do something they’ve failed to achieve in their last four matches and that is to put the ball in the back of the net.

Over 360 minutes have gone past since Pirates last scored a goal. Malawian Gabadinho Mhango is the last person to score for the club, and that came in the 3-1 league victory over Bloemfontein Celtic on August 3.

Beauty and the Beast

Never mind Beautiful Football, the Buccaneers must accept to sometimes win ugly. These are some of the words expressed by Champions League winners Bruce Ramokadi and Jerry Sikhosana, who say that, this is what continental competition requires from time to time.

Speaking to Orlandopiratesfc.com, Ramokadi said: “Look, there is no doubt that we have been playing some of the most beautiful football in recent months in the country, but this is a different competition which requires a very different approach.”

“When playing in the Champions League sometimes you need to put aside the pretty stuff and focus on getting the result. A team can have all the ball possession but the most important statistic in football during our time and even in today’s game – is the goals scored column. At the end of the day that’s what is important, nothing else.”

Ramokadi heaped praise on the current Pirates setup and its quality to defeat Green Eagles on Saturday, depending on how they approach this must-win game.

“We won in 1995 with our backs against the ropes, just like this game. We arrived in Nigeria to play BCC Lions, only to be told our match would be delayed because the President’s wife was hosting a rally at the stadium on that very day, so the game had to be delayed!”

“After that rally, the pitch was horrendous and we knew we had to change the way we play in order to survive the conditions. We cut out all the fancy stuff in midfield and just played the ball long to Marks Maponyane, who held it up while we flooded their box. It frustrated them to the point that their fans turned on them on them and started supporting us. In the second half we finished them off and the rest is history.”

“Beautiful football has its place, but not in the current circumstance where we need to win at all cost, and win well to advance to the next round. We have to get the result, especially after the three games losing streak. We are at home and we have to deliver for the home fans.”

Sikhosana echoed the sentiments of his former teammate, saying, “We won the Champion’s League with only one favourable away result, the draw away to Eleven Men in Flight FC. When we lost in the away leg in Gabon to Mbilinga FC we actually celebrated that loss because we knew that when we played at home we would play to our strengths and make sure we win.”

“Things are different at this point and we need to go all out. Good football is for TV and our boys need to stop trying to look cute and just grind out a result at home, finish and klaar! When you play at home it needs to show, everything must go forward. They have to stop with this business of building slowly from the back. They need to go forward, attack and show hunger for goals”, added the Champions League Final goalscorer.

“When we played at home, Helman Mkhalele and Brandon Silent would go wide and I was permanently inside the box. We would unsettle the defence by playing to score goals. Our boys must make Green Eagles and any other team that comes to Orlando feel like they are in the house of pain. They have the backing of our supporters, there is nothing more that they need.”

“The only acceptable result tomorrow is a win, and as fans we don’t really care how they play, we just want a win. This is Africa and there is no place for beautiful football when the chips are down. The only thing that counts is a win,” concluded Sikhosana.

The match will be played at the Mecca of South African football, the Orlando Stadium. Tickets are currently on sale at Computicket and Shoprite Checkers outlets nationwide.

Kickoff for this encounter is scheduled for 21H00.