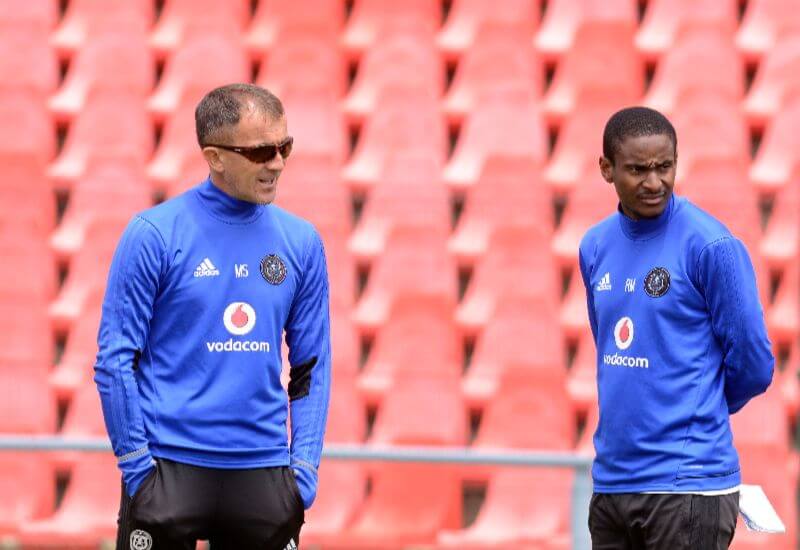 2018 has so far been very good to Head Coach Micho Sredojevic and Orlando Pirates.

The Serbian tactician with help from his brains trust of Rhulani Mokwena and Benson Mhlongo, has guided his team up to second place on the log table courtesy of their eight wins out of ten league outings. It is off the back of these results that has seen the 48-year old walk away with the PSL Coach of the Month for two consecutive months and also Pirates claiming their first Q-Innovation award.

However, with all the praise and personal accolades coming their way, Sredojevic and his charges are not getting carried away. They know very well that with five games still to play this season, anything can happen. The coach has reminded the team that they’ve achieved nothing yet and this is a crucial part of the season.

The Mighty Buccaneers enter a testing week which sees them play two tough matches against SuperSport United and Amazulu. Two teams that are in desperate need of points to qualify for the top eight.

In United, Pirates face what the English term as a ‘bogey’ side. The term attributed to a side that always does well against another team regardless of the circumstances.

To say that Matsatsantsa have had a poor season would be a major understatement. The three-time PSL league champions have sacked their coach and even lost their main striker Jeremy Brockie to their cross-town rivals Mamelodi Sundowns. Matsatsantsa are currently in 14th position, only three points away from the relegation zone.

However, despite all this, history will show that whenever this team faces Pirates they pull up their socks.

Pirates coaches are well aware of this fact, and this is why Micho, Rhulani and Co. are not taking this match for granted.

Pirates have gone eight matches without a win over United in all competitions. Of those previous eight encounters (5 league, 3 cup), SuperSport United have won five times and there have been three draws.

However, it must be noted that it’s been more in the cup where Matsatsantsa have been dominant over the Buccaneers, with the things being a lot closer in the league. Both teams having won five matches each in the previous 15 league meetings.

The last time Pirates won over United was on 29 April 2015, with the Buccaneers bouncing back from an early Thuso Phala goal to win 4-1 courtesy of a Menzi Masuku brace and goals from Kermit Erasmus and Sifiso Myeni.

United have been very inconsistent this season and it’s through this inconsistency that has seen them collect only three points out of a potential fifteen in their last five league encounters.

Of those five matches, United only scored once and that was in their 1-all draw against Mamelodi Sundowns. Of those five league matches, they have conceded four goals.

SuperSport United will be without the services of their instrumental captain Morgan Gould who saw red in their 1-0 defeat to Polokwane City.

The absence of Gould will see the likes of Tefu Mashamaite and Azubuike Egwuekwe competing to defend alongside Clayton Daniels.

Present form when talking about players such as Thuso Phala and Evans Rusike. These are two players who always seem to save their best performances for key matches. The Bucs defence will need to guard these two very carefully because on their day they can trouble many top defenders.

Since the departure of Brockie, United have struggled up front but Aubrey Modiba has done well in contributing to seven goals this season from midfield – he currently leads the goal scoring charts in the team and also leads in assists with four assists to his name. His contribution to 11 of his sides’ 20 goals scored this season makes him an obvious threat and key player for Matsatsantsa.