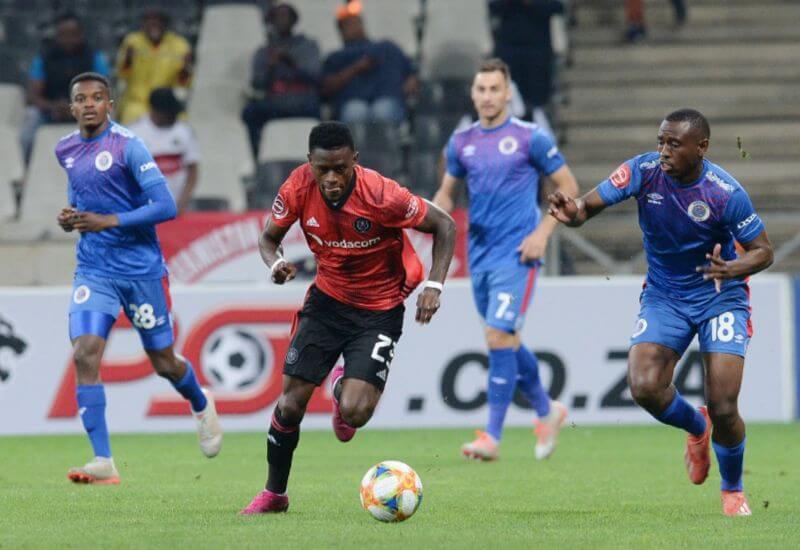 Orlando Pirates suffered defeat at the hands of Supersport United, who claimed a 3-0 victory at Mbombela Stadium on Wednesday night in an Absa Premiership clash.

Bradley Grobler provided an assist to go with his brace as the visitors had no answer for the clinical performance from the hosts.

The Buccaneers were looking for a positive result at a venue which has been unkind to them over the years, with their last visit yielding a 1-0 defeat to go with a notorious result where the Bucs succumbed to a heavy defeat against the Pretoria outfit.

That desire to shake the Mbombela monkey off the Buccaneers’ back almost got off to the perfect start with Gabadinho Mhango attempting to catch Supersport goalkeeper Ronwen Williams unawares with a long-range shot in the first minute.

At the other end, it was a former Buccaneer who got the closest early on, as Kudakwashe Mahachi darted inside his man before unleashing a shot which went wide of target.

The Pirates defence looked solid in the opening stages, forming a wall in front of the United attack and forcing long-range shots from Teboho Mokoena and Sipho Mbule. Both men seeing their efforts sailing wide or over the bar into the stands.

Pirates' best chance of the half fell to Fortune Makaringe, who joined Mhango in making his first league start for the Bucs. The midfielder got on the end of a pin-point cross from youngster Thabiso Monyane but his glancing header found Williams alert to the danger to make a reflex save to keep things level.

It would take a defensive error for Supersport to take the lead, as Monyane and Ndengane caught by a bouncing ball which Monyane attempted to head one back to Sandilands, before Grobler got to it first. The poacher made it 1-0 with his toe poke past the keeper in the 35th minute.

The Soweto giants' search for an equaliser proved to be in vain as the two sides went into the break with the home side holding on to a one-goal advantage.

The second half started with changes for both sides as Thembinkosi Lorch and Justin Shonga replaced Alfred Ndengane and Musa Nyatama, while Supersport United brought on Ghampani Lungu for Mahachi.

It only took United ten minutes after the restart to double their lead, as Grobler grabbed his second on the night as he volleyed past Sandilands after more errors in defence in the 55th minute.

The Buccaneers threw everything into attack as they looked to claw their way back into the game but that task would be put beyond reach when Lungu got onto the end of a well-weighted ball by Grobler and knocked it beyond Sandilands with a little over 20 minutes remaining.

It was Pirates who had more of the ball in the dying moments of the encounter, but a consolation goal proved elusive as Supersport saw out the result and maintained their hold over the Soweto Giants at the Mbombela Stadium.