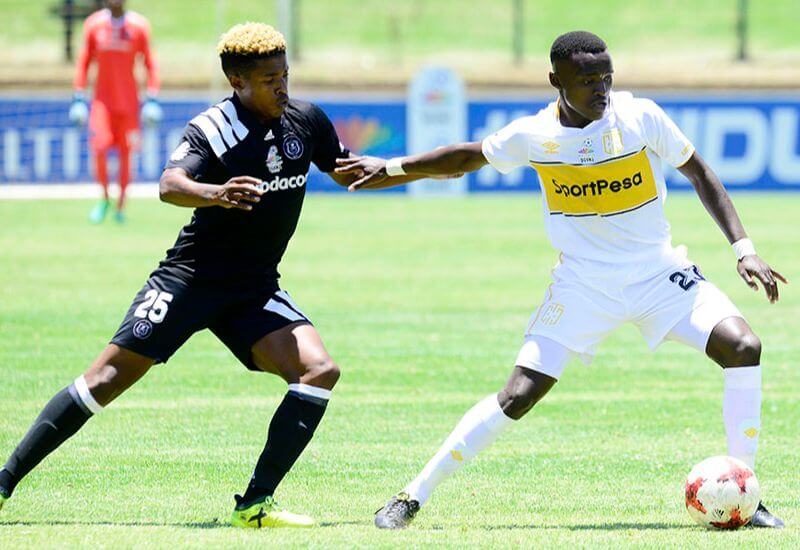 The Tsakane heat took its toll on both sides as the Bucs saw their first half dominance grind to a disappointing draw with Cape Town City on Saturday afternoon in the Multichoice Diski Challenge. After a fast start that saw the Bucs assert early pressure on the visitors, it looked as though it would be one-way traffic in the East Rand, but this was not to be as City shared the spoils of the 2-2 result.

Orlando Pirates midfielder Yanga Baliso was first to register his intent after the Buccaneers won a corner, taken short by Baliso to Ricardo Lourenco, before the Cape Town-born youngster saw his ferocious shot turned around the far post for a corner. Lourenco was next on the attack as he got onto the end of a Samuel Nkomo header at the near post before firing his shot wide of the target.

The Bucs continued to press the visitors with attacks coming from the right through Zaahir Witbooi and Fredie Hlalele, however the opening goal came from the boot of Jaqueel de Jager in the 16th minute. Cape Town City floated a freekick into the box which the Bucs failed to clear, leaving Tsebo Tsotetsi in the goals facing a 3-v-1 attack. The Bucs keeper did well to block the initial strike by Shane Roberts, but the rebound fell to de Jager who was well placed to punish the errant defending.

Going a goal down, much against the run of play, did not deter the Young Bucs in their quest to find the equaliser which came on the half hour mark came from the most unlikely of sources. After a lung busting run down the left, defensive midfielder Katleho Molaba did well to find Baliso, then carry on his run for the return ball, before cutting inside and firing into the top corner with aplomb.

Hlalele made it 2-1 a few minutes later, getting onto the end of a ball towards the far post. With numbers in the box and Cape Town City reeling, Hlalele brought the ball under control before smashing it through Van Rensburg at the near post.

As the game wore on, it seemed fatigue and lack of concentration got the better of the Bucs as Cape Town City profited yet again from some suspect defending. Witbooi was beaten on the right and with Nkomo out of position, Tsotetsi was once again left exposed for the easy tap in from close range.

Our next match in the Multichoice Diski Challenge will be played on Sunday, 21 January against Bidvest Wits at Sturrock Park.